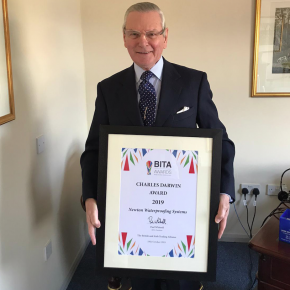 Newton Waterproofing is thrilled to have won the Charles Darwin Award at The British and Irish Trading Alliance (BITA) awards in recognition of its unique membrane recycling service.

As the first and only service of its kind in the waterproofing industry, the membrane recycling scheme is designed to reduce the amount of waste plastic sent to landfill from waterproofing projects. Off-cuts of membrane from Specialist Contractors projects are collected by Newton, chipped into small granules, and then collected by a national recycler for reprocessing and reusing to make new products for the construction industry.

Warren Muschialli, MD, comments:  “Everyone at Newton Waterproofing is thrilled to have won the Charles Darwin Award in recognition of our innovative membrane recycling service”.

The Charles Darwin award is for companies that have successfully introduced a new product, service or process in response to a changing landscape and Newton are honoured to have won the award over some tough competition, including the globally operating Gerberit Group.

Since the scheme’s launch in 2017, Newton has successfully prevented 12,675 tonnes of plastic from going to landfill and 14,264 tonnes of CO2 emissions from entering the atmosphere.

“The construction industry has a huge part to play in managing and reducing the amount of waste going to landfill each year and we’re proud that our Membrane Recycling Service is allowing us to play our part in tackling the problem,” added Warren.

This award is now the fifth accolade won by the scheme in just two years, having already won the KEiBA Commitment to the Environment Award; the prestigious Innovation of the Year award from the National Building Awards; the Sustainability award at The Property Care Association Best Practice Awards; and the Kent Environment Champions Award as part of the Kent Environment Strategy.

In addition, the scheme was also recognised at the Plastic Industry Awards in the Best Environmental or Energy Efficiency Programme of the Year category alongside huge global companies such as Coca Cola. 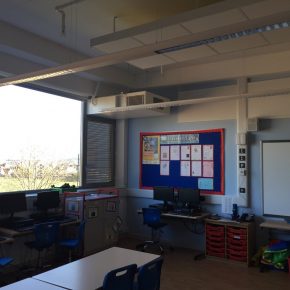 As new guidance on the role of good ventilation in addressing incidences of coronavirus is published, Gilberts has announced its Hybrid MFS ventilation has already achieve compliance.