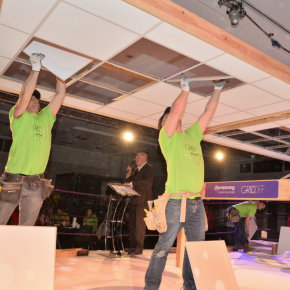 For Interceil, this was their very first #GridOff competition, which is held to recognise Armstrong’s national network of Omega contractors.

This nail-bitingly close final was the climax of the second #GridOff competition, which took place at Birmingham’s NEC on Wednesday March 14th.

Graham and Steve (pictured hard at work in the above photo), had travelled from Northumberland with colleagues for the occasion, both scooped an Omega Seamaster Planet Ocean watch, plus the winner’s belt from the boxing-themed ceiling installation competition. 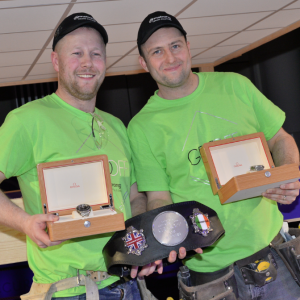 The victorious Interceil team of Graham Bullock and Steve Curry 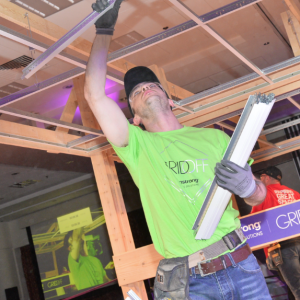 Compered once again by ‘the voice of boxing’ Steve Bunce, the competition attracted over 10 teams from the Omega network.

The installations in a mock boxing ring with two ceiling rigs were judged by Sebastien Nalin, from Armstrong’s suspension systems arm, and Ian Young, manager of Armstrong’s installation training centre in Gateshead.

Interceil completed their final installation in 05:14:80 (including 10 penalty seconds) made more unbelievable given the pair do not usually work together.

Interceil’s Steve Curry said he was ‘totally over the moon’ to win, whilst Graham said they felt at the time they were doing better in the final than in the first round.

Interceil’s MD, Steve Jones, said Interceil were ‘so very proud to be involved in this amazing day’, adding how social media in the north east had ‘gone crazy’.

He praised Armstrong for providing a platform for the competition, saying it was both ‘fantastic and very rare,’ that they are receiving plaudits.

Kevin Coyle expressed disappointment at losing out, but said it was a pleasure to be part of such a ‘well-run and prestigious event.’ 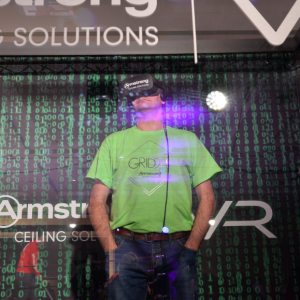 “It’s taking the excitement away from the VR and that usually doesn’t happen. The way it has been set up, the whole boxing thing, is the best way to glorify your partners. For a second they are the ones in the spotlight,” he said. 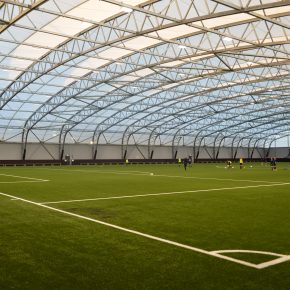