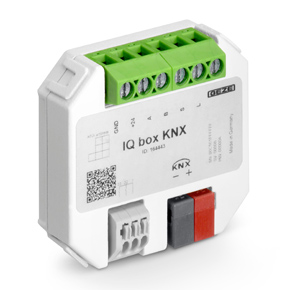 The new IQ box KNX from GEZE is a user-friendly interface for smart window drives to control natural ventilation at the touch of a button.

The IQ box KNX is operated through a BMS central panel which displays the status of automatic windows, that can be controlled and monitored within a central location. The panel communicates with other KNX components, i.e. push buttons and sensors, to ensure that all windows in a building can be closed at the same time.

If rain or high wind speeds are forecast, the IQ box KNX will send a signal to the window drives to close them. The interface can reverse this action if the concentration of CO2, humidity or ambient temperature are too high within the building.

In terms of security, the IQ box KNX reports the status of a window to the KNX building system or building management system after performing every command. The module also provides additional information including precise opening width, as well as faults and updates on the opening and closing cycles which can assist maintenance planning.

For remote operation, GEZE has produced a KNX Display Corlo Touch Wi-Fi device which connects to the IQ box KNX, allowing the user to control the interface using a tablet, smartphone or home computer.

The Corlo Touch generates a visual display of the network featuring nearly 250 icons depicting components of the KNX system, such as smoke detectors and KNX switch.

There is also a switch relay RDW module available which makes it possible to control 24V window drives with 230V voltage and reduces the amount of wiring needed, making installation easier.