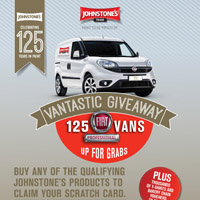 The competition – which began from Monday 18th May – is running in all 177 Johnstone’s Decorating Centres in the UK, as well as selected Johnstone’s Trade stockists.

The promotion will offer the vans as part of a prize fund totalling over £1.8 million to celebrate Johnstone’s 125th anniversary. To be in with a chance of winning, customers need to purchase one of the qualifying products, such as Johnstone’s Acrylic Durable Matt, Smooth Metal paint and Aqua Gloss.

They will then automatically receive a scratchcard for the promotion. In addition to the 125 vans, there are also thousands of Johnstone’s t-shirts and vouchers available to win.

Johnstone’s is supporting the promotion with a host of advertising across national press and radio.

ñIt’s not often a 125th anniversary comes along so we wanted to mark the occasion in style,î commented Richard Mazurkiewics, Johnstone’s Trade marketing manager.

ñThis competition does exactly that and is a fantastic way of us saying thank you to our customers for their support and helping make Johnstone’s the brand it is today.î