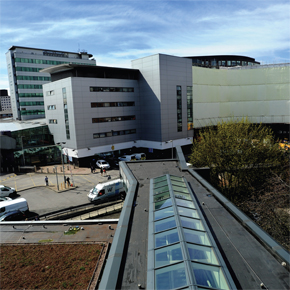 Refurbished in 2010, Piccadilly Gate is one of the most prominent office buildings in Manchester. Not only is it home to Government departments based in the North West, it is also the first commercial building that visitors to the city see when they arrive at Manchester’s Piccadilly railway station and even has an entrance direct from the station. 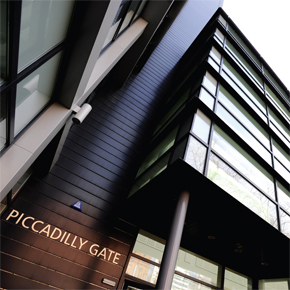 The refurbishment programme saw the original 1960s office block transformed into a contemporary office space with a roof split over three levels.

The tenth floor roof is home to the building’s extensive air handling plant, the level four roof sits above the building’s giant escalators – which were the longest in Europe when they were installed – and at level three there is a green roof installation that was carried out as part of the refurbishment’s BREEAM accreditation.

The problem with all three roof areas was that the single ply membrane installed as part of the refurbishment programme had failed. Leaks were most problematic on the level four roof, where two rainwater outlets had not been sealed, causing unsightly staining of the ceiling tiles above the escalators.

Meanwhile, seam integrity issues on the level ten roof were exacerbated by a drainage channel and the level three green roof installation made it difficult to investigate the cause or extent of membrane failure.

Piccadilly Gate’s building manager, John Fozzard, brought in building technology and façade consultant, Alan Brookes, to advise on the best way best way to address the issues with the roof while managing the need to maintain a fully operational environment. The Alan Brookes team recommended installation of a cold applied liquid waterproofing system as an overlay, providing a solution that would minimise disruption while offering a 25-year, BBA-accredited service life.

Castle Contractors was brought in to carry out the work and collaborated with the manufacturer to finalise the specification for the overlay. While a polyester, resin-based liquid waterproofing system was selected for the level three and level four roofs, the decision was taken to use a solvent free fleece reinforced, liquid applied waterproofing system for the level ten roof because of the air handling plant located there. The specification of these products meant that the building management team was able to avoid any nuisance odours for the building’s occupiers.

The fleece reinforced, liquid applied waterproofing system was also a suitable solution for the vertical surfaces of the drainage channel on the level ten roof. Having cleaned and prepared the existing roof surface, Castle Contractors applied a primer. The installation team then applied the resin in a single wet-on-wet process in which the resin is first applied to the substrate; reinforcement fleece is then laid directly on to the wet resin, immediately followed by more resin on top.

This ensures complete saturation of the reinforcement fleece. Once cured, the resin forms a seamless, elastomeric waterproof membrane that cannot delaminate, is UV stable and bonds directly to the substrate.

On the level four roof, Castle Contractors began by removing the failed rainwater outlets and replacing them before preparing the roof surface and applying the cold liquid system in the same single process. This time, however, the polyester resin-based liquid waterproofing system was used and applied in the same configuration of primer, resin-fleeceresin.

For the level three roof, the contractor had to remove the green roof before the overlay could be applied to the failed membrane, carefully taking up half of the green roof and preparing the roof surface beneath it, applying the membrane in a single wet-on-wet process. Once the new membrane had cured, the section of green roof was replaced and the process was repeated with the remaining section.

The roof refurbishment was carried out at three different levels with no disruption to the building and no aesthetic changes to its appearance. The result is an overlay scheme that has not only put an end to the damage that the leaks were causing to the building’s interiors but has also removed any possibility that similar issues might recur by replacing the failed system with an alternative that offers performance and durability with no vulnerable seams.

Find out more in the June issue of ABC+D Magazine