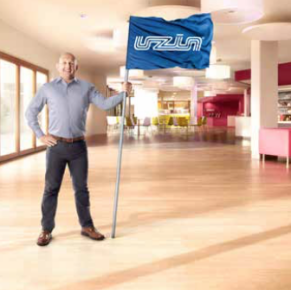 The Gulbenkien Café at Kent University has benefitted from a new longterm flooring solution, installed using a selection of UZIN products.

The project was undertaken by SW Flooring, tasked with replacing the existing vinyl floorcoverings in the café, as bubbles had appeared in certain areas. The initial area was 150-200m2 but the floor area increased to 400m2 after problems were encountered.

Originally scheduled to take place over a period of 10 working nights, SW Flooring was instructed to remove the existing floor­covering and prepare the subfloor with one coat of a smoothing underlayment and replace with a variety of Dalhaus Sheet Rubber, and Karndean Vinyl woodplank.

After removing the existing floorcoverings, it became apparent that the subfloor was suffering from moisture issues caused by other contractors applying DPMs and latex smoothing compounds on top of each other at each stage of failure.

SW Flooring started by removing all the existing latex smoothing compounds by hand with a small mechanical Kango drill. The timber section was replaced with a structural DPM, and was overlaid with 6mm of plugboard to increase rigidity.

The project was completed with the application of 2 coats of UZIN PE 480 to the paving slabs, incorporating an accelerator to speed up the drying time. The second coat was fully blinded to create a mechanical key for the smoothing compound, and UZIN NC 182 was used in isolated sections to repair where the different substrates joined.

The timber and plywood areas were primed using UZIN PE 630 and UZIN NC 175 fibre-reinforced smoothing compound was applied between 6 mm to 10 mm. This created a subfloor, that was suitable to receive any floorcovering of the University’s choice.

Ten months later, the University is reportedly pleased with the workmanship and specifications that was created for the project.