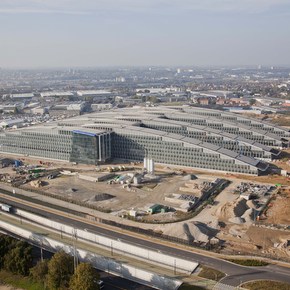 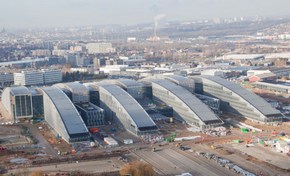 crowning the huge new NATO offices there, designed by American architects Skidmore, Owings and Merrill in collaboration with Belgian Assar Architects. The building is 250,000 m² overall and has an estimated construction cost of a billion euros. In addition to 120,000 m² of office space, the 4500 NATO employees based there will be able to enjoy an extensive range of facilities – restaurants, a bank, shops and areas for sports and relaxation and will be working in a building that requires less heating, cooling and ventilating energy consumption due to the incorporation of thermal insulation, thermal mass and effective solar shielding of glazed areas. 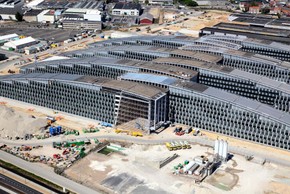 design, incorporating a zinc standing seam system with foamed glass insulation. Foamglas of Pittsburgh Corning was specified for the project and there is a Belgian ATG approval for the combination of this with zinc roofing. This insulation can play a part in an unventilated roof and thereby help to prevent ingress of, for example, snow because no ventilation openings are required and also help to prevent condensation on the zinc. No technical approval was available however for use of the combination of materials at such a low pitch as proposed for parts of the new NATO building.

At the highest point, the roof pitch is zero degrees which is less than three degrees as required according to the ATG so weather-tightness at this extreme was a concern due to the risk of capillary action of water through the standing seam, particularly in conditions of driving rain. This major element, as well as structural strength and thermal performance of the overall roof design was evaluated thoroughly by the Kiwa BDA Expert Centre Building Envelope (ECBE), headed by Professor Nico Hendriks and Kiwa BDA Testing, headed by Technical Director Chris van der Meijden. Key considerations included in the weather-tightness assessment were the seams themselves, detailing of the placement of the clips and screws, the quality of the fold strips, the dimensions of the material and its quality control.

Full-size laboratory testing of typical roof sections was undertaken and after some revisions and modifications approval of the roof design was given. “A new assessment was undertaken in cooperation with Kiwa BDA” said Richard Verlijsdonk, project manager of roofing contractor Ridder, “and we are delighted to have gained approval for the system.” This has led to the issuing of a BDA Agrément® by Kiwa BDA ECBE.

The building takes the form of eight 200m long wings – four each side of a vast central open area, the Agora, itself under a 38m high arched roof. The design is modelled on the idea of two interlocked hands (minus thumbs!) representing the NATO partnership of nations.

All roofs are supported by a steel structure. The roof make-up comprises a steel deck on which a primer has been applied to aid bonding of the 80 or 100 mm bitumen-coated insulation slabs that are placed on top. Then comes a single layer of APP roofing sheets, 3 to 4 mm thick with a polyester support, which are pre-welded to the insulating layer. Over that is a low slip PE film and finally the profiled zinc sections. The 200m long roofs of the wings are divided into nine compartments, separated from each other by gutters. The lower five boxes are 18m long, the upper four 26m. At the lower edge of the roofs is an aluminium box to allow connection to the facade and the outside edges around the building which also have aluminum strips to connect to the facade construction.

Rainwater drainage is via 500mm wide gutters and syphonic outlets to minimise the number of downpipes and connections to underground drainage – effective water management is one of the client’s key environmental objectives.

The standing seam was profiled on site from the coils of the zinc material. Factory Production Control (FPC) of this production, an important element of the BDA Agrément, was undertaken by Kiwa Belgium. After the sections were profiled, they were hoisted on to the roof via a mobile tower crane. The long wings were built first and roofed then the intermediate roof sections above the Agora. This approach was chosen in consultation with the other parties who worked on the project with safety as the highest priority. But the logistics of this project were also very important and complex – not just from the building process but from the security of this key NATO asset.

Anyone who had to access to the site had to be thoroughly screened in advance, so rushing new personnel in to advise on or solve a sudden site problem was simply not on.

From Chris van der Meijden (Kiwa BDA) – “The NATO HQ building was an amazing project to work on and we were very pleased to be able to bring our expertise and test facilities to the table and approve the roof design.