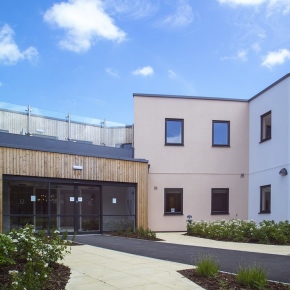 Castleoak Group have saved both time and money with early specification of Knauf AQUAPANEL Exterior at the design stage of a 60-bed care home in Winnersh.

Designers were able to reduce the size and weight requirements of the foundations due to lightweight performance of the Knauf AQUAPANEL Exterior panels, compared to brick and block construction.

When looking for an imaginative faceted facade in Winnersh, near Wokingham, for care operator Abbeyfield, Castleoak turned to Knauf.

A unique community is created at the Abbeyfield Winnersh care home, formed of four striking circular clusters, to deliver innovative demetia care. Used as a substitute facade system to brick, the Knauf AQUAPANEL Exterior cement boards were completed with a rendered finish.

In March 2015, work began on site with Castleoak deploying lean construction techniques to optimise the build process, and was completed in April 2016.

Neil Robins, Castleoak Operations Director, and his colleagues were charged with designing a build strategy without the use of brick whilst facing pressure and difficulty securing brick and block supplies.

He explained that Castleoak’s solution was to prefabricate all panels, floors cassettes, and for the first time, apply external render panels at the Castleoak factory for this build. Consequently, this enabled us to better control the build programme with less dependency on subcontractors.

Knauf’s characteristics as a directly applied render carrier board made it easier to decide to use AQUAPANEL.

The cement board provides the ideal key for render as it consists of aggregated Portland cement with coated glass fibre mesh embedded in the back and front surfaces, combining the benefits of brick and block.

Further time was saved due to the fact that Knauf AQUAPANEL was introduced very early in the design stage. The decision was made with Knauf’s Specification Team, at the design stag, to assemble much of the external facade system offsite. Exterior panels were installed by Sequoia Joinery after being constructed at the Castleoak factory and being delivered to site.

The design and materials were well specified and performed, according to Castleoak’s Operations Manager, Morgan Palmer.

Due to the fact that factory fitting, transport and site installation has no adverse effect on its final performance, Knauf AQUAPANEL Exterior is ideal for offsite installation.

Providing a solid, dry base that can withstand the extreme weathering effects of wind, rain and snow, the Knauf AQUAPANEL Exterior has been rigorously tested and certified by the BBA for use as a ventilated exterior wall panel system on timber frame and steel frame buildings.

It is also ideal for creating exterior soffits and the illusion of an internal ceiling continuing through the facade to the outside of the building.