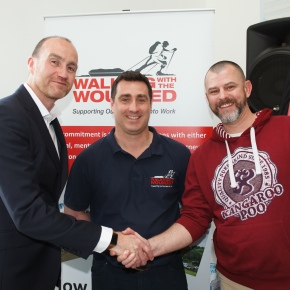 Knauf employees Walking With The Wounded

Dozens of Knauf employees at the plant in Sittingbourne have pledged their commitment to the Walking With The Wounded charity.

Knauf and its employees throughout the country have selected WWTW as its charity partner for 2017.

WWTW raises funds and works to retrain and re-skill men and women who have been wounded both physically and mentally during their time in military service.

The partnership was launched on Thursday when WWTW Director of Fundraising Andrew Cook, WWTW beneficiary Duncan Welton and selected guests visited the manufacturing facilities of Knauf and received a factory tour and event sign up.

Andrew Cook explains “We will engage with around 3000 veterans during the year but our programmes need more money to upscale and support more veterans.”

Knauf employees will participate in various upcoming charitable events as part of the pledge and raise money for a worthy cause.

The partnership follows numerous charity events that Knauf employees undertook in 2016. Knauf has plans to take part in several charity events in 2017, including the Cumbrian Challenge 2017, the Men’s Health, Survival of the Fittest and the Windsor Half Marathon.

While competing, Knauf employees will be supported by WWTW, with a number of beneficiaries taking part alongside the Knauf teams.