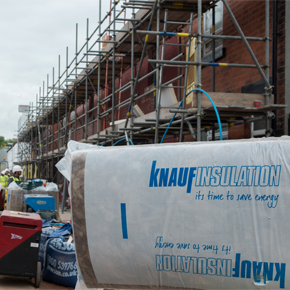 Knauf Insulation has donated its Earthwool Frametherm slabs and Earthwool RoofSlab Hybrid to a special edition of BBC’s DIY SOS.

The project involved the transformation of Canada Street and New Street in Newton Heath, Manchester into affordable housing for ex-servicemen and women.

The homes were transformed for war veterans with the help of local and national volunteers and the assistance of the Walking With The Wounded charity, which retrains veterans to work in construction trades.

Knauf provided the project with 125m2 of Earthwool FrameTherm slabs, installed within the external walls of the properties to provide a warm and insulated living environment.

As some of the homes featured on the DIY SOS project had flat roofs, Knauf Insulation’s Earthwool RoofSlab Hybrid insulation was installed to provide acoustic, fire (Euroclass A1), thermal and compressive strength performance.

Lydia Sharples of Knauf commented: “We are delighted to support such an amazing and important build. It’s vital that the commitment given by our veterans is recognised and creating a new housing community for them does just that.”

The two-part DIY SOS special was first aired on 14th October, followed by a second episode on the 21st October on BBC One.

Find out more about Knauf Insulation