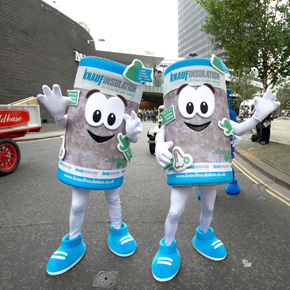 Knauf Insulation will be joining the Worshipful Company of Builders’ Merchants (WCoBM) float as part of the Lord Mayor’s Show on 12th November.

The theme for this year’s float is “Builders’ Merchants: Supplying Britain’s Building Needs” and will comprise a single modern vehicle, followed by a JCB Forklift with a mock pallet of bricks, placards with prominent messages and walkers in building materials costumes – including Knauf’s Earthwool Loft Roll insulation characters.

First established in the 16th century, The Lord’s Mayor Show is one of the best-konwn annual events in London. The two-mile procession through London is made up of 150 floats, celebrating the inauguration of Honorary Liveryman, Alderman Dr Andrew Parmley who will be installed as the city’s new Lord Mayor.