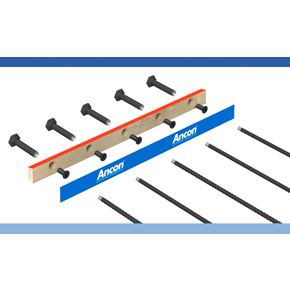 Ancon has launched an animation video, detailing the benefits of its new KSN Anchor System, which offers a safer and easier alternative to traditional re-bend continuity systems.

The animation offers a step-by-step guide to installation, demonstrating how KSN Anchors can simplify core-to-slab connections in multi-storey concrete frames.

By presenting the benefits of the system, the video aims to evaluate the limitations of traditional re-bend continuity systems, to which the Ancon KSN Anchor System offers a safer alternative.

The KSN Anchor System includes internally-threaded anchors, which are cast into the wall. The anchors have been designed to accept continuation bars, which have been prepared with a Bartec parallel-thread, during construction of the adjoining slab.

The system can accommodate a range of bar lengths, including EC2 lap lengths.

The anchors were exposed to a wide-ranging test programme, which included a comprehensive audit of Ancon’s production facilities. The construction joints were subject to heavy loading and evaluated in terms of performance.