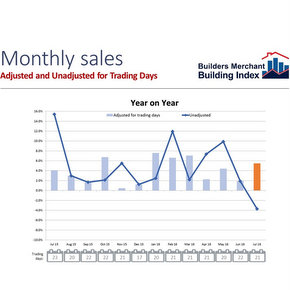 No signs of Brexit effect in July

July’s builders’ merchants’ sales, the first full month after the EU Brexit vote, were down year on year, but with two fewer trading days in July this year, sales per day were actually 5.5% higher.

Unadjusted for trading days, total Builders’ Merchant sales were 3.7% down in July compared to the same month in 2015. Heavy Building Materials, the largest BMBI category, was down 3.2% and the second largest, Timber & Joinery Products 5.3% lower. Six other categories did less well than merchants generally, including Plumbing Heating & Electrical (-6.3%) and Kitchens & Bathrooms (-9.5%).

Compared with June, sales in July were down 3.9% with one less trading day contributing. Heavy Building Materials slipped 3.7%, Landscaping was 8.8% lower and Renewables & Water Saving, a small volatile category was down 15.6%. Tools (-2.4%), Ironmongery (-1.7%) and Decorating & Renovation (-0.3%) were marginally lower.

Total sales in the three months May to July were 4.1% up on the three months February to April, helped by two additional trading days. Landscaping gained 22.9%, in a seasonal surge, and Heavy Building Materials (+4.5%) were also ahead of total sales. Kitchens & Bathrooms (-5.8%) and Plumbing Heating & Electrical (-10.4%) were weakest.

Economists and commentators have been wrangling over the effects of the Brexit vote. Has the economy tanked? Has it rebounded?

As the ONS said, there is very little anecdotal evidence that the vote to leave the EU affected construction output in July. BMBI confirms that. But comparisons with what it might have been will have to wait for the August BMBI report, although a difference in trading days with August 2015 will still complicate like-for-like comparisons. The fog is clearing, but we probably won’t get a definitive picture until the September Q3 BMBI report.