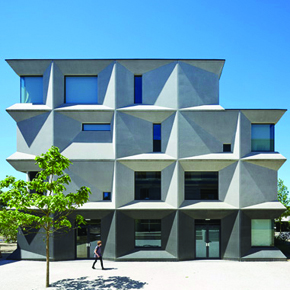 The RIBA prize, which was founded in 1996, recognises an outstanding contribution to the evolution of architecture over the past year.

In a close collaboration between Lendlease and AHMM, the new campus design for Burntwood School in Wandsworth was one of the last schools of New Labour’s Building Schools for the Future programme and marks a culmination of Lendlease’s diverse ten-year involvement with AHMM…

Burntwood School is a girls’ secondary school and sixth form with academy status, located in Wandsworth, London. Designed by Allford Hall Monaghan Morris (AHMM), the £50m Burntwood School rebuild and refurbishment was managed and co-ordinated by contractor Lendlease and completed in September 2014.

The project championed a sustainable transformation of the original 1950s school site in south-west London and now offers students an engaging environment in which to study.

Previous laureates of the coveted Stirling Prize include Foster and Partners for 30 St Mary Axe (the Gherkin) in 2004 and David Chipperfield Architects for the Museum of Modern Literature, Germany in 2007. 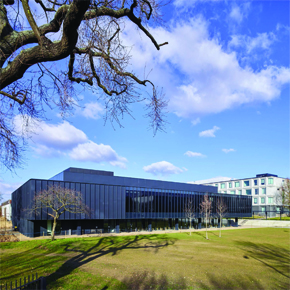 The RIBA judges noted Burntwood’s “quality, openness, confidence and solidity” and were particularly impressed with the project’s mature aesthetic and fusion of new cast-concrete spaces and original 1950s structures – two of which were designed by Sir Leslie Martin – retained on the campus.

Dan Labbad, chief executive officer, international operations at Lendlease, said: “We are delighted that RIBA has recognised Burntwood School’s progressive design, which ultimately achieves its key purpose of providing a wonderful learning environment for students. It has been a pleasure working with AHMM to deliver this cutting-edge project.”

Paul Monaghan, director of AHMM, said: “Schools can and should be more than just practical, functional buildings – they need to elevate the aspirations of children, teachers and the wider community. Good school design makes a difference to the way students value themselves and their education, and we hope that Burntwood winning the Stirling Prize shows that this is worth investing in.”

A phased construction was proposed to minimise temporary accommodation and maximise capital expenditure on the permanent buildings and campus landscape. 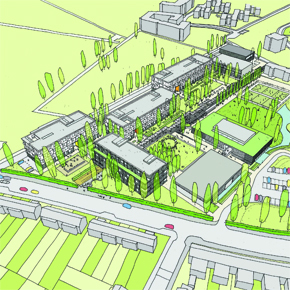 This approach had a direct impact on where the new buildings were located and how they were phased during the construction stage. The school’s existing games court offered the single biggest space for the initial phase of construction.

It is also connected to the highway with a service road running along the eastern boundary affording good site access. This enabled a substantial amount of new teaching space to be provided for the subsequent decant of existing teaching spaces into their new permanent homes.

It also made sense to accommodate the maths and science building on this space, as it provided the school with its specialism building in the first phase and provided a permanent home for the science labs which were housed in the first building to be demolished.

Careful consideration was given to the possible impact of construction works on the Grade II Ice House on the site. The development did not involve any works in or around this immediate area of the building and additional protective hoarding was erected.

Under the London Borough of Wandsworth planning conditions, the project was required to achieve a minimum 20% carbon reduction through the implementation of on-site renewable energy technologies.

To satisfy these objectives, the school includes a range of energy-efficient measures and renewable energy technologies, while respecting affordability constraints.

The main renewable energy source for the development is biomass heating. To maximise efficiency and ensure the correct energy balance, the biomass boiler is sized to deliver around 50% of annual heat demand.

Natural gas-fired boilers were installed to provide the remainder of heat load and to act as back-up during routine maintenance of the biomass boiler. Solar hot water thermal panels generate 50% of the domestic hot water demand of the school.

The solar water collectors were installed as a series of separate systems located on the roofs of buildings and sized to meet the specific demands of each block. The windows have been sized to balance the required light levels for classroom activities, while ensuring that solar heating loads are reduced.

By placing the glazing on the inside of the precast panels, it was possible to use of the full depth of the façade for shading. Operable windows within each block allow occupant control of windows.

Burntwood School achieved a BREEAM rating of Very Good for the new build elements and refurbishments.

A vibrant graphic and wayfinding scheme developed by Studio Myerscough creates a new identity for the school as a whole and a distinct identity for each building.

Taking the school’s key theme as a starting point: “The best education today for the women of tomorrow,” Studio Myerscough looked to the ground breaking artistic work of the Bauhaus women of the 1950s and the Suffragettes’ movement before them, specifically referencing typology used by the latter.

Inspired by the new faceted building façades and the Bauhaus code of colours and patterns, each primary entrance to the four new curriculum buildings is double height with a striking geometric tiled pattern. The distinct colouring and patterns are continued throughout the environmental design and wayfinding system for each building.

Secondary and tertiary entrances are differentiated through architectural scale and landscaping, facilitating intuitive wayfinding across the campus.

Logo design The new school logo, also designed by Studio Myerscough, took inspiration from the original school emblem which was designed by students to mark the foundation of the school in the 1950s.

The new school logo retains the symbolic tree and ties together the colours and patterns established in the graphic design and wayfinding system.

Find out more in the December issue of ABC+D Magazine