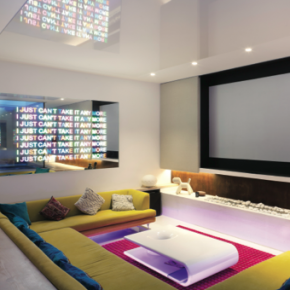 Positioned at the end of a traditional mews, the uniqueness of the home is realized immediately upon entering.

The bullet-proof front door, chosen not for its security benefits but for its inky-blue metallic gloss, is not so much an entrance as a statement of intent – personality has been injected into every part of the home.

A colourful seating pit arranged in front of a movie screen in the basement is the family living room and, on the wall, a light box by the artist Simon Tyszko bears the message: “I just can’t take it any more.” For a more relaxing vibe, there is a sauna and an all-white, minimalist bedroom. Claire’s colouful array of statement hats boast their own unique hat-wardrobe. The fun quirkiness of the Hogarth’s home can be seen throughout, with a courtyard garden filled with a fully- operational outdoor fireplace. 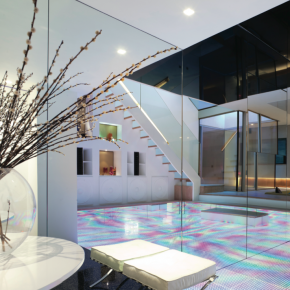 Beneath the house there is a full-scale dance floor, embedded with thousands of tiny pulsing lights, a professional-standard DJ booth and a sound system purchased from a nightclub in Birmingham. Claire stated: “The idea for the dance floor came from how I love dancing, but I’m too old to go out.”The 150ft2 space satisfied the dreams of several other family members too – the couple’s 20-year-old son Gil, a budding music industry manager, got the DJ booth he craved.

Ian Hogarth, commented: “I spend too much time at work compromising and this is a house that was designed very much for us, for fun, and for our family.”

There’s a golden property rule that says you should avoid stamping your personality too hard on your home, so as not to spook future buyers if you decide to sell. That ethos has been totally ignored here; the Hogarth’s home aspires to standout. 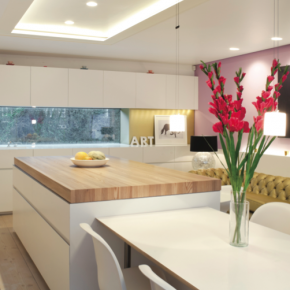 The areas of practicality are of course down-to-earth; the kitchen is a glossy white and has a nifty central island with a work surface that slides away to reveal the hob and create a breakfast bar in one swift move. There is also a toast room inbuilt into the kitchen to keep the crumbs minimal and dirt hidden away. The Hogarth’s home would not be complete without an air source heat pump and solar panels, which should mean no heating bills.

When the Hogarths bought the property, there was already planning permission for a traditional house. It took eight months to persuade the Kensington and Chelsea Council to give consent for a much more ambitious four-bedroom and four-storey alternative. The total cost of the works was £650,000 (of which £350,000 went on the basement), bringing their total investment to £1.06m.

The valuation is now much higher than the original quote, proving even the most extreme family home makeover has the potential to turn a serious profit.

Hogarth Architects create inspired contemporary homes ranging from multi-million pound city homes to stylish country retreats that elegantly fulfil each client’s requirements and reflect their individual lifestyles. The essence of every Hogarth design is to view the home as a sanctuary with the whole design concept shaped around the client’s specific needs.

The practice undertakes commissions for new build homes as well as apartments, refurbishment/remodelling, extensions and interiors. Each project is approached as an individual piece of design blending together traditional materials and state-of-the-art technologies to create a comfortable, stylish home that adeptly meets the needs of 21st-century living.

“To ensure the highest quality, we are actively involved with each project from the earliest stages through to completion. Our creativity, professionalism and discretion have generated a loyal following amongst a number of high-profile clients. Our work is regularly featured in the national media.”

Hogarth Architects will be honoured at the United Kingdom Property Awards in the Marriott Grosvenor Square, London on the 28 October for its project Ash Row. It has been named among the most innovative, exceptional and ambitious projects of 2016. Representing their country on an international stage in London, the Hogarths are looking forward to collecting their award later in the year.