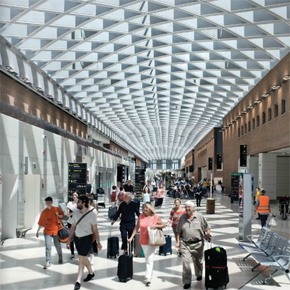 One Works has completed Phase 1 of a major development plan for Marco Polo Airport, with expansive new facilities carefully integrated into the existing fabric of the airport. ABC&D Magazine finds out more…

Working alongside SAVE Engineering, One Works – a global design and consultancy firm with a specialism in transport architecture and engineering – has overseen the complex architectural and structural challenges involved in bringing Venice’s Marco Polo airport up to 21st century standards.

The extension is defined by a new 280 metre long plaza, featuring a dramatic grindshell roof that allows sunlight to filter down to the passengers below.

Marco Polo Airport is an important part of northern Italy’s transport infrastructure, with a growing number of passengers using routes through it, thanks to an overarching traffic strategy. This gateway is the third such intercontinental hub in the country, as it includes connections to North America and the Middle East.

The reconfiguration of Marco Polo is based on an €800 million development plan that runs from 2012-2021, aimed at radically reshaping the airport to accommodate increased traffic, without compromising on safety and efficiency.

In 2016, Marco Polo Airport completed the Water Terminal (a new 5,000 square metre terminal, linking passengers to the docks); an elevating moving walkway; a tri-generation power plant and barracks for the local fire brigade.

This year saw the completion of Phase 1 of the expansion of the airport terminal.

Inaugurated on June 17th, the new 11,000 square metre extension creates a kind of forecourt for the airport, improving accessibility to the terminal and connecting passengers to the dock via the new moving walkway; from here, passengers can travel to Venice in style by Vaporetto or water taxi.

The new forecourt, which will accommodate  passengers arriving from all means of transport (including train journeys in future development phases), is comprised of a 280 metre long, fully-glazed gallery that takes advantage of the 22 metre wide interstitial space left free in the original complex between the terminal and the dual level road.

This allows the new forecourt to offer generous, light-filled spaces, for departures and arrivals, with a lightweight roof structure that offers strategic flexibility. 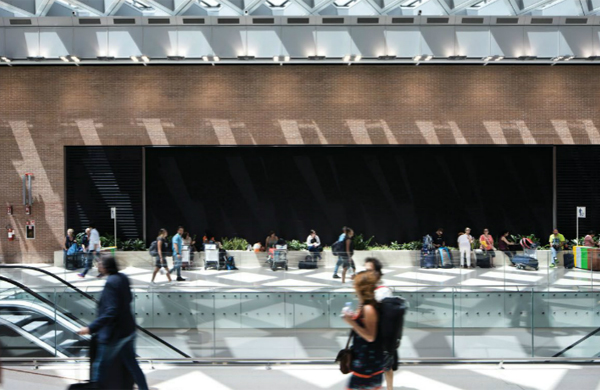 The new distribution layout has been developed to many the functional requirements of the day-to-day terminal operations, but also to embrace the beauty of the spectacular views of the Venice lagoon, which embarking passengers receive from the commercial square.

One Works has created a harmonious dialogue between the original airport buildings and the new extensions, ensuring that the iconic lagoon landmark is expanded sustainably, now and in the future.

Inspired by the traditions of Venetian glass, a new VIP area, known as the Marco Polo Lounge, is characterised by the use of glass, both as a form generator and as a finishing material. The lounge is configured as two contrasting spaces with their own singular identities.

On one side, overlooking the track and bathed in natural light, is the main relaxation area featuring floor-to-ceiling glass walls and an undulating ceiling that blends with the parquet floor. On the other side of the partition glass is an area close to the central core of the airport, dedicated to ancillary functions and services such as the reception, cloakroom, changing rooms, toilets, storage and food preparation areas.

Between these two spaces, there are two further rest areas while the lounge also boasts a new winter garden that partially covers the existing terrace.

Integration between new and existing structures

Expanding a passenger terminal is often more complex than building a new one, as it requires a dedicated joint commitment between the airport operator and the design team. Functional and capacity targets are made up of architectural, structural and plant aspects, involving operational management, commercial output and maintenance processes.

Passenger terminal extensions and upgrades are based on a careful programme of works and analysis of different options to ensure the best solutions are developed for harmonising the existing structures with new spaces and new generations of plant facilities, such as air-conditioning, lighting and data transmission.

The success of the project is based on a perfect balance between the so-called hard areas, mainly represented by the connections between the levels and the structural dimensions and the soft areas, which include flexible surfaces that can be modified, with low investment, to suit the operating and commercial needs of the airport.

The big challenge runs along the joining lines between old and new parts of the airport. The Marco Polo Airport project comprises a phased extension programme that will add more than 100,000 square metres to the existing terminal to meet the most complex functional, architectural and constructive demands in the landside and airside areas, for over 15 million passengers expected every year.

This project will accommodate the required traffic capacity up until 2030, while respecting the fragile ecosystem of the neighbouring lagoon and the historic centre of Venice. The project will also provide greater comfort and accessibility to increased numbers of international passengers, offering spaces with higher quality standards.

In order to meet the highest European standards, security and infrastructure capabilities consistent with demand for an adequate level of service, as well as environmental and economic sustainability, are key factors for the success of the strategic masterplan.

The approach adopted will also allow the complexity of infrastructure integration with potential urban development to be easily managed and will create greater accessibility; also a key objective for the development of the airport and part of the long-term strategic masterplan, for which One Works is also providing consultant support.