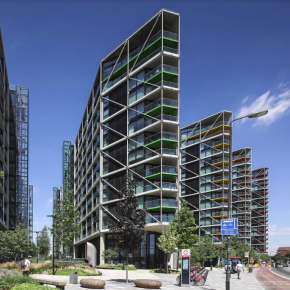 Luxury apartments light up London’s skyline – thanks to Waterloo

Riverlight occupies a prime central London location directly fronting the River Thames and comprises a group of six pavilions ranging from 12 to 20 storeys in height.

As part of the multi-million pound project, in which the apartments are complete with floor-to-ceiling glazing, stunning views and luxury resident facilities, including a swimming pool and cinema, air distribution products were supplied by expert manufacturers Waterloo.

Each building featured bespoke glazing and inverted balconies to increase daylight and maximise views of the river – to create the perfect living environment for new owners, Waterloo’s air terminal devices were fitted inside five of the six buildings. 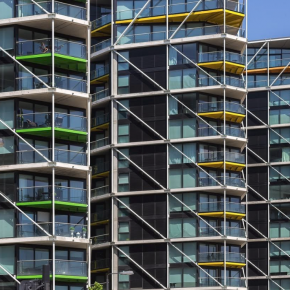 Waterloo delivered aesthetically-pleasing linear bar grilles which were integrated at a high level in every room.

The APM plasterline grille was chosen so that the surrounding frame could be plastered into the wall with only the central core visible. Special clip fixings were developed so that the frame could be installed first. After the room was decorated, the core was then fitted.

Diffusers were fed via thermally-lined plenums, which were sized to give good throw patterns at various fan coil air volumes.

Before the installation of any products, Waterloo created working mock-ups in the test lab to ensure perfect air performance and specified noise levels could be achieved. 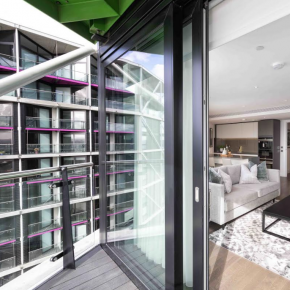 Waterloo’s variable ventilation controllers deliver the exact amount of air flow to enhance the luxurious feel of each of the residential and retail blocks. Once Phase One was completed, the same format was created through to the other blocks.

Over the course of several months, hundreds of apartments were installed with a state-of-the-art air distribution system. On top of this, other onsite facilities, which included restaurants, a gym and virtual golf, all needed specialist air distribution.

Maximising space and ensuring each grille was finished to a high specification was vitally important to Waterloo. Consideration had to be given to each of the separate apartment blocks and, in a bid to minimise disruption, work was carried out in organised phases.

Waterloo staggered manufacture and delivery to the London site to facilitate the needs of the developer.

Andrew Mildon, sales office manager at Air Systems (SW), described his enjoyment at being involved in the project.

“This project was really exciting. Our aim was to deliver excellent air conditioning and air distribution throughout each apartment. When one block was complete, we literally moved on to the next,” he said.

From initial design stages, developers were keen to create something truly unique within this area of London. Considering the central location, it was crucial to conjure up a unique flagship development, with buyers seemingly unable to wait to invest.