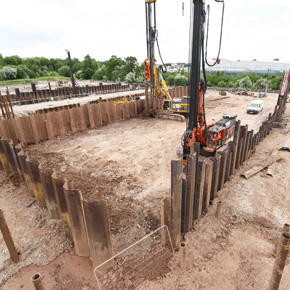 Mabey Hire has completed its largest ever excavation support project, as part of the construction of the Derby and Derbyshire Waste Treatment Centre in Sinfin, Derbyshire.

Mabey delivered 450 tonnes of its proprietary waling beam and propping equipment on the project, which was installed on five levels into a 9,000m3 excavation.

The £145m treatment centre currently being built measures 38 metres long, 19 metres wide and 12 metres deep. Once completed in 2017, the centre will accept waste into the large reception pit, where it will be held for sorting and processing and used to generate power for 14,000 homes. 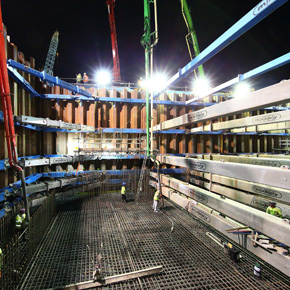 The pit was constructed by using the cofferdam technique of sinking sheet piles onto the ground before beginning excavation.

The process was planned by Interserve construction, with Mabey engineers working collaboratively.

Clumber Civil Engineering excavated the pit as Mabey began to install a combination of Super Shaftbrace and Supershaft Plus waling beams and Super Bracing 400 and 600 struts.

The waling beam and propping solution was able to provide more space within the excavation, as the Super Bracing Struts can be used to create unsupported spans of up to 31 metres.

A sheet piled cofferdam solution was specified, supported by as few frames as possible, as it proved to be the most economical and sustainable solution available, as the equipment was able to be removed for use elsewhere.

Mabey supplied a total of 450 tonnes of equipment for the excavation, the largest it has ever supplied to a single project.

A key aim of the project was to maximise efficiency and minimise the overall environmental impact. Every delivery of equipment was precisely timed to fit with crane availability, and the equipment was single handed straight into the excavation.

Interserve’s constructibility manager explained: “There was a collaborative approach from the outset between Mabey’s engineers and our technical services department. This allowed Mabey to fully understand the project requirements, which led to a more economical outcome during the detailed design phase.”

The excavation support scheme designed by Mabey yielded further advantages after the excavation was complete.

The system allowed the three lower frames to be removed after the base had been cast, allowing complete freedom from obstructions at the working level. 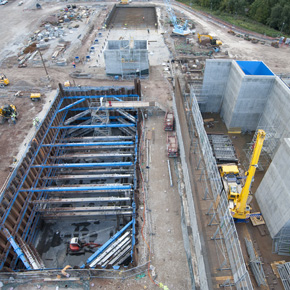 Mabey also created a complete BIM model of the excavation support system using its in-house Revit library of components, which allowed teams to preview the installation and removal sequence of support frames around the excavation, concrete construction and backfill operations, and identify any possible problems before they occurred.

To aid the health and safety of the scheme, Mabey Hire’s project sequencing drawings were printed out on large laminated sheets and posted around the excavation perimeter.

The drawings served to highlight construction constraints and ensured that all site operatives were aware of the sequence, design and purpose of the entire project.

The Derby and Derbyshire Waste Treatment Centre is scheduled for completion by April 2017. When operational, it will significantly increase Derbyshire and Derby Councils’ recycling rates and reduce the amount both councils send to landfill.