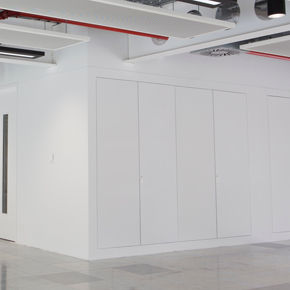 Aspex, one of the UK’s leading doorset companies, has successfully fire tested the Novista Riser Steel doorset with multiple door leafs mounted in a single frame.

Passing this test, which was conducted for two hours by Exova, the UKAS accredited testing company in High Wycombe, means end users will be provided with a seamless solution, allowing access to long riser areas without the need for intermediate supports or walls.

The door frames for these multiple leaf systems can be very wide so they are supplied in kit form to ensure easy assembly on site, without the need for special tools.

The door leafs are hung using a pivot system with a sprung top pin, making them easy to install and remove.

Launching earlier this year, the Novista Riser Steel system is ideal for a wide range of projects with either standard single and double door leaf configurations.

Ashley Burberry, Managing Director of Aspex UK, commented: “Meeting fire safety regulations is a crucial element when it comes to doorsets, and it is something that we as a company are committed to.

“All of the fire rated doorsets that we provide have been tested by UKAS accredited companies and are supplied under the International Fire Consultants (IFC) certification scheme.

“The Novista Riser doorsets have primary fire test evidence meaning that we can guarantee that these doorsets will deliver on performance and meet the highest safety regulations.”