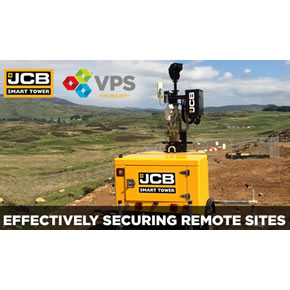 VPS Site Security’s JCB Smart Towers are increasingly being specified to protect remote sites which are located in difficult to secure environments, such as power stations and rail lines.

Sites such as power stations are often located away from urban areas; railway tracks along stretches of countryside are often impossible to secure. Because of this, cable theft has affected both Virgin Railways East Coast line and central Scotland’s network recently.

JCB Smart Towers have been designed to provide a network of CCTV monitoring to manage security risks to such sites.

One such example can be found along a 14km stretch of highway construction, which is being undertaken by Costain in South Wales; railway networks, such as France’s SCNF, are also using similar systems from VPS Site Security.

VPS Site Security has received recognition from the industry for its dedication to managing security risks; it has been shortlisted as a finalist for both the British Construction Industry and the Security Excellence Awards 2015.

The company has also released an online guide on Effecively Securing Remote Sites for utilities and rail companies.