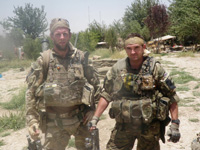 Part of Plymouth-based 42 Commando unit, Gavin was one of five Royal Marines blown up whilst on patrol in Helmand Province’s Nad e Ali north – an area described as the most dangerous square mile in the world, due to a littering of Improvised Explosive Devices (IEDs).

Gavin Bolger during his time in the Royal Marines.

The explosion left Gavin permanently deaf in his right ear, and he also suffered a broken ankle and shattered shin in the blast, in addition to lung damage.

After being medically discharged from the Royal Marines, the 34 year old has since been offered the opportunity to retrain as a site manager with Midas Construction.

Gavin praised the Midas scheme for transforming his life, by opening up a world of career possibilities for the future, as well as supporting him with his ongoing physical and mental rehabilitation.

Gavin in his new role at Midas Construction.

I never thought I would be able to make that transition. I was so overwhelmed by everything at the beginning of the placement and there were times when I thought I couldn’t do it. It has been a massive test and really taken me out of my comfort zone but it has helped me with my recovery so much.

Instead of people getting shot, I am thinking about things like the door handles we are going to use at our current development. The change has been amazing.

Gavin had served his country for 12 years before the bomb blast in August 2011. He had heard about the Midas placement through the work of The C Group, a Royal Marines charity that inspires businesses to support personnel while in the Armed Forces, in their transition to civilian life afterwards.

Katharine Callus, HR Business Partner for The C Group, said: It has been a privilege to be part of this intelligent training and recruitment process.

Midas has helped Gavin see that his aptitudes and Royal Marine values are sought-after in the commercial world and his return to his past levels of confidence in a new and challenging environment has been a joy to watch.