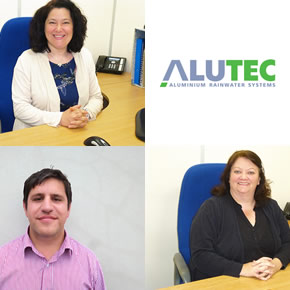 Marley Alutec has announced the appointment of Maxine Gallager as its Internal Sales Support, Bill Johnson as its Area Sales Manager and Louise Stewart-Young as its new Marketing Communications Manager.

The new appointments demonstrate Marley’s commitment to development, reflecting the growth it has achieved and sustained; over the past twelve months, the company has launched an updated website, which offers access to BIM files, and entered into a landmark agreement with Sheffield Council to provide eaves and rainwater systems for a prominent roofing project.

Maxine Gallagher has been employed to provide sales administration, supervising the Marley’s areas sales team. She brings a wealth of experience to the role, having previously held a number of managerial positions.

As Area Sales Manager, Bill Johnson will oversee the Midlands, North Wales, Bedfordshire and Oxfordshire. Boasting an impressive employment history, Bill has worked in a range of head office and field based roles for Wolseley. At Marley, he will be responsible for maintaining positive relations between the company and architects, contractors and merchants.

Louise Stewart-Young will join the company as Marketing Communications Manager: she will be responsible for conveying Marley’s message to a broader audience. Throughout her career, Louise has held several senior communications and public relations roles across different industries.