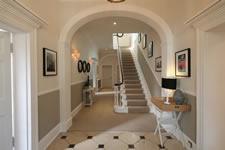 Located on the outskirts of Huddersfield, Fenay Lodge is a Grade II Listed property which has recently suffered from a roof leak.

The leak caused damage to the stairs, hall and landing of the 18th century property; in light of this, it was targeted for refurbishment.

The owners felt it was important to remain faithful to the heritage of their historic home.

To do so, they sent some samples of its existing paint colours to Johnstone’s dedicated colour advisory department, PPG Extra.

The team used the swatches to specify an appropriate colour scheme: muted tones, including pale stone grey and an assortment of green-greys, were deemed benefiting of the building’s Georgian history.

The team advised that matt finishes were also typical of the era; Johnstone’s Flat Matt paint was, therefore, specified for use.

To reveal the property’s original plasterwork, several layers of wallpaper had to be removed. Johnstone’s Stain Block Primer was then applied to prevent any stains left by the water from bleeding through.

The selected shades of paint were then mixed using Johnstone’s colour tinting system.

The woodwork was painted in white Acrylic Satin – a paint from Johnstone’s Ecological range – to provide an elegant contrast.

Finally, to create a striking finish, the bannister rail was stripped down and painted black in Johnstone’s Quick Dry Opaque Wood Finish