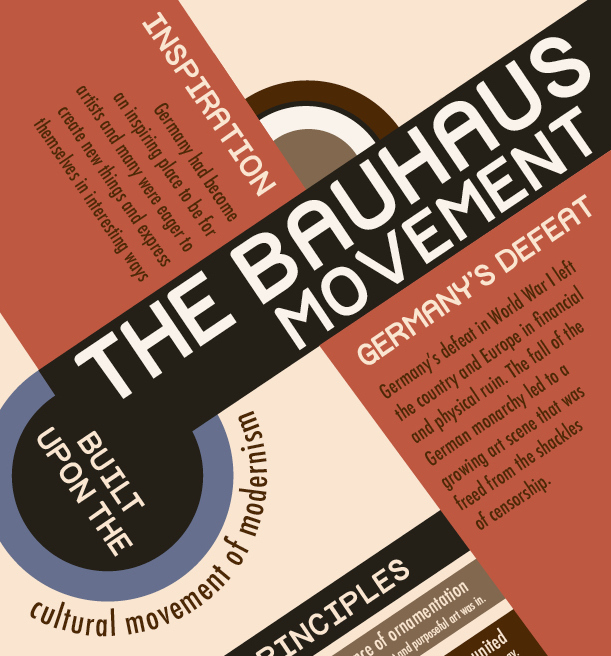 Merging art with craft: a history of the Bauhaus movement

Merging art with craft: a history of the Bauhaus movement Infographic

A History Of The Bauhaus Movement

Infographic prepared by Bauhaus-inspired furniture retailer, Aram, details all the key facts, dates and design philosophies and traces the Bauhaus movement from its inception to its closure, exploring the legacy that has inspired artists and craftsmen in the U.S and Europe.

Following Germanys defeat in WW1, the countrys art scene flourished in the absence of censorship. Building on the no-frills approach of modernism, the Bauhaus movement began in 1919 as a fusion of art and design.

Today, we see the functional yet pleasing styles reflected in furniture, architecture and even our road signs.

The Bauhaus school was originally founded by Walter Gropius.

The first building was situated in Weimar and featured classes such as woodcarving, stone sculpture and wall-painting.

Students of the school learned that art and craft went hand-in-hand.

Gropius summed up the design philosophy by saying: Every object is defined by its character [] for it should perfectly serve its purpose; it should be lasting, affordable and pleasing to the eye.

Legacy of the Bauhaus movement

Architecture was added to the schools curriculum in 1927 and soon after a new director was appointed in Hannes Meyer.

However, he proved unpopular and was replaced by Ludwig Mies Van Der Rohe in 1930.

Unfortunately, the Nazi party was elected in 1931 and they pledged to destroy the school.

In 1933, Rohe was expelled from Germany and the school, now in its third iteration in Berlin, was shut down for good.

Legacy of the Bauhaus movement

However, the designs and ideas spread to the U.S and Europe and we see the simple, functional shapes of Bauhaus in designs like IKEAs flat-pack furniture and the simplicity of British Road signs.

Merging art with craft: a history of the Bauhaus movement – infographic from Aram