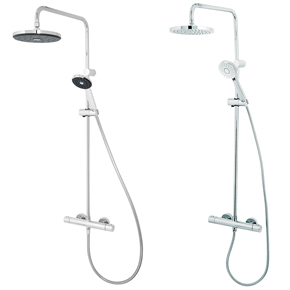 Methven has added two new models to its range of cool-to-touch bar showers, extending its presence in the UK market.

Cool-to-touch technology ensures that the bar valves never exceed the temperature of the mixed water, resulting in a safer shower experience.

The new Kiri Satinjet bar shower makes use of Methven’s Satinjet technology. By combining twin-jets of water, Satinjet showers are able to deliver over 300,000 droplets of water per second, which performing at a low flow rate.

The Kiri Satinjet model benefits from an in-built diverter, which enables users to switch between the Satinjet handset and a fixed headset.

Methvan’s Deva range has been extended to include the Dynamic bar shower with diverter. In addition to thermostatic control and cool-to-touch technology, this model includes a Krome 200mm headset and a multi-mode handset, each with a chrome finish.