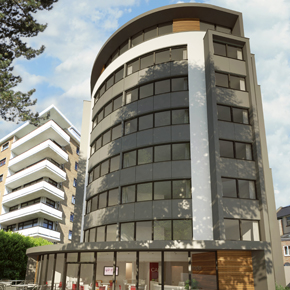 With over 3,000 students, and more arriving each year, Arts University Bournemouth was in need of additional student accommodation. New halls of residence have been developed, using Metsec’s Metframe as an off-site framing solution.

ASN Capital had a plot on Bath Road in Bournemouth where it had planning permission to build a halls of residence. Delivering the project as the main contractor, ASN Capital wanted to maximise project efficiencies by sourcing the fewest packages possible.

The footprint of the plot was small, and the planned building was complex, with a curved front façade and a staggered shape to the rear. ASN Capital selected Atkin Trade Specialists to deliver the installation and after reviewing the options, together selected Metsec’s Metframe as the offsite framing solution for the building.

The Metframe solution is pre-panelised off-site to reduce time on-site and increase the overall speed of build; ideal for ASN Capital’s ambition to complete the project as soon as possible. In fact, thanks to the speed of Metframe construction, the erection of the superstructure took less than 13 weeks, halving the time a standard build would have taken.

A major factor in reducing the time needed for the build was that in addition to the frame, the stairs and lift shafts were integral to the Metframe system and were installed as each floor was constructed. This removed the need for additional contractors to fit the stairs and lifts at a later date, and instead everything was completed concurrently using Metsec’s off-site solution. Having an integrated solution also meant a single point of contact for a significant amount of the build.

The 2,610sqm halls of residence at Bath Road has a concrete basement housing a communal room and bike store, a ground floor including a lobby, built partially using Metframe, and eight storeys above ground housing all 84 en-suite accommodation studios for students, entirely built from Metframe.

The Metframe solution was able to withstand a concrete roof on the building, which future-proofed the building, allowing an additional floor to be added at a later date if desired.