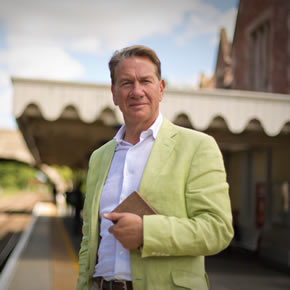 Aired on BBC 2, The Great British Railway Journeys shows former MP, Michael Portillo, travel around Britain via its railway network, comparing the modern day locations to how they were once described in George Bradshaw’s Victorian guide.

In a recent episode, Michael stopped off at Crown Paints’ Darwen factory: he was given a tour of the premises and shown how the company has evolved since the early Victorian era.

Crown has grown tremendously from its early days of wallpaper manufacturing; high-tech production equipment now allows it to produce 385,000 litres of paint on a daily basis.

Crown’s research and development team showed Michael how a spectro-photometer can be used to analyse colour composition; by mixing base colours with pigments, the team was able to create a shade that matched his vibrant jacket.