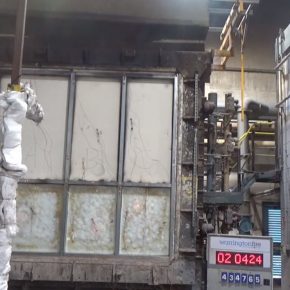 The test at Warringtonfire on one of Wrightstyle’s steel and glass advanced curtain wall systems has breakthrough significance for a number of fire safety applications.

However, the test was carried out with the exterior building surface facing into the furnace – this made the test significantly more demanding on the system components.

It makes the Wrightstyle system an ideal solution in places where a high level of integrity and insulation is required – for example, in atriums, fire escapes and between buildings, or as a fire break between different areas of a building.

Chris Peters, chief design manager, commented: “This is an excellent result for our SR60 curtain walling system and further underlines the quality and high performance offered by our systems.”

Wrightstyle high performance systems can be found nationwide, and from the USA to New Zealand. Contract completions in the past few weeks have taken place in the Kingdom of Jordan, for a new tourist village, and Hong Kong, for a flagship museum of art.

The company has long expertise working across sectors on both large and small projects.  A good example of multi-directional compartmentation would be to provide a fire break between a supermarket and its underground car park – and Wrightstyle has been involved in such projects.

Chris added: “We are seeing more demand from the export market for this higher specification curtain walling, as specifiers design in compartments with a fire risk from either side of the glass.”

In addition to adding further test evidence to an already comprehensive list, the test incorporated steel spandrel panels, making it one of the first alternative infill options to achieve two hours of integrity and insulation performance.

Spandrel panels can have both a functional and aesthetic purpose, and generally have to meet thermal, acoustic, fire performance and moisture requirements.

The target performance for the Wrightstyle test was to achieve EI120 (120 minutes integrity and insulation).  The test ran for a period of 148 minutes, exceeding the criteria for a pass by 23%, an overrun that is rare in high performance tests.

Full furnace temperature was achieved after some 60 minutes into the test, with a peak temperature of 1050 degrees C.

The test module size was three metres by three metres and the test was jointly carried out by Wrightstyle and SCHOTT Technical Glass Solutions GmbH, one of the world’s leading speciality glass manufacturers.

The SR60 curtainwall framing system, which can be installed internally or externally, also gives Wrightstyle renewal of a full global assessment and fresh test evidence to underline the capabilities of the system.

Chris continued: “This gives architects and specifiers new confidence in the WSL SR60 system, allowing them to push the boundaries of fire safety.

“Including spandrel panel in the test adds a new level of fire safety to an aspect of the building envelope where a curtain wall framing system is used – these should not to be confused with cladding panels, which are entirely different.”