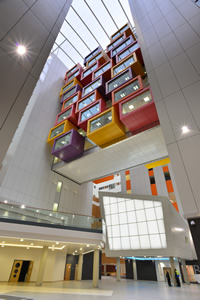 The Glasgow complex is divided into a children’s hospital and a larger adult’s hospital, comprising 30 operating theatres, a dedicated laboratory block and a helicopter landing pad.

Officially, it is the largest critical care complex in Scotland.

The project also featured elements from Armstrong’s service and systems portfolio. A variety of suspension and DryWall Grid systems were supplied, along with tiles for healthcare and acoustic purposes.

The installation was undertaken by Roskel Contracts, which Armstrong worked closely alongside to create mock-up areas of two sizes of the square-edged Bioguard Acoustic tiles.

Combining sound absorption and attenuation to IS05 levels with antimicrobial properties, the tiles were installed over two and a half years. In total, 110,000 square metres were fitted.

In the cantilevered pods, a 100mm Axiom profile was paired with a tailored 225mm Axiom profile; these were riveted together to create a 325mm bulkhead/upstand at a custom length of 3.6m.

A variety of Armstrong’s suspension systems were also used on the project. These include:

Each system was fitted by PFP a year before tiling in order to reduce the damages to services in the ceiling void.