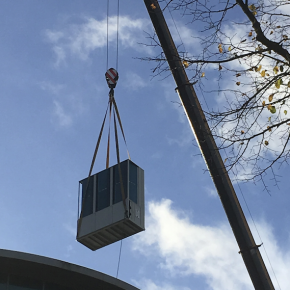 Mitsubishi Electric e-Series to the rescue for Contour Homes

When Contour Homes, one of Manchester’s largest registered social landlords, was looking for a new chiller due to ongoing problems with its old one, the installation of three Mitsubishi Electric EAHV-P900YA-N e-series heat pump chillers was recommended.

Contour Homes, part of the Symphony Housing Group, has more than 12,000 properties under its ownership and management across 23 local authorities.

One problem with the old system was the level of noise it created; by utilising highly efficient components within a uniquely shaped chiller, the e-series offers low noise levels.

Cooling is one of the main contributors to energy usage in buildings, so the new system had to be energy efficient to help the building comply with modern efficiency requirements like the Minimum Energy Performance Standard, which was introduced on 1st April this year.

Another potential issue was that the existing plant space is extremely tight, making access to the area somewhat difficult. Interruption to office opening hours and staff activity also had to be kept to a minimum.

GOS Mechanical & Electrical Ltd has years of experience in providing mechanical, plumbing and boiler services throughout Preston and Lancashire, with this installation completed between October and December last year.

“The e-series chiller was a sensible choice as it was available immediately. The only concern we had was the tight working space, but the flexibility of Mitsubishi Electric’s modular approach meant it could be easily manoeuvred into position,” he said.

The e-series’ unique modular approach allows up to six individual units to be connected together to provide a system capacity from 90kW to 540kW; this approach reduces space requirements and simplifies lifting and installation.

This chiller also has two inverter driven compressors that allow the unit to operate between 8% – 100% of capacity. By having a broad operating range the e-series has exceptional part load efficiencies which is where most systems will operate.

Contour Homes is delighted with the new system, with Rob Brierley saying it has provided the company with a ‘modern, reliable and energy efficient’ chiller that he is sure will prove to be a ‘great investment in the long term.’