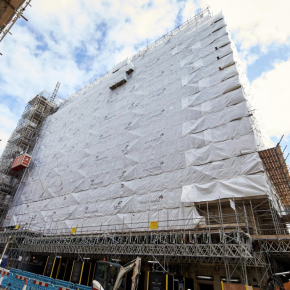 Monarflex Airflow FRA containment netting is protecting both workers and passers-by during the Category A fit out of India Buildings, one of Liverpool’s most iconic.

Built between 1924 and 1932, India Buildings is a nine-story steel-framed complex clad in Portland stone that was awarded Grade II listing for its architectural quality.

Commissioned by development manager Shelborn Asset Management, Sale-headquartered contractor Styles&Wood selected Monarflex Airflow FRA to shield the scaffolding during the £38.25m, 72-week programme, as it knew it could rely on it, having previously worked with this robust but decorative material. 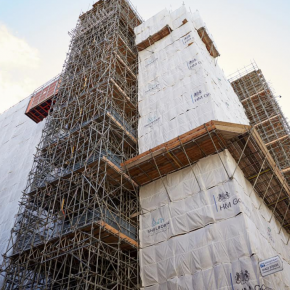 Rob Burgess, Contracts Manager and leader of the Styles&Wood project team, who also worked on the specification with the scaffolding team, commented: “Wind loadings were a big factor in choosing the material because the site is on the coast and is subject to high winds from along the Mersey.

“This is a good system that we’ve used elsewhere, using vents to dissipate the wind’s force which stops it acting like a sail.

“Speed was also important, and it was delivered to site, complete with our logo and that of the client, within 10 days and up on site with two weeks.” 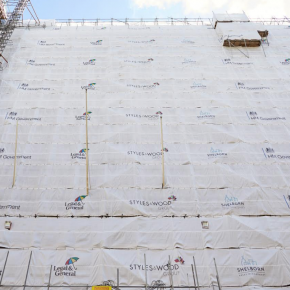 Both sides of the sheeting protect, with workers inside enjoying a stable working climate on the scaffold in order to meet deadlines regardless of the weather, while outside, no one is inconvenienced by activities such as sandblasting or water jetting.

Distributed by BMI, Monarflex Airflow FRA is an incredibly strong flame-retardant containment netting that has been specially developed for high and low-rise locations where strong winds are a significant risk.

It is suitable for DigiWrap printing so that clients can protect their machinery, workforce and passers-by from debris, while promoting their business from what then becomes a massive billboard. 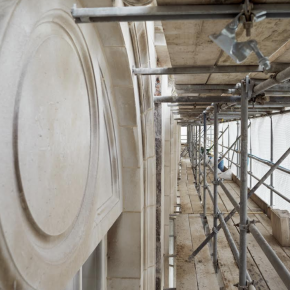 Made from a woven polypropylene composition with flame retardant additives, Monarflex Airflow FRA has open and closed woven sections that are ideal for high-rise buildings as the open sections release air pressure on the rest of the material.

This special open-weave lowers the pressure on the scaffolding structure in high winds, so there is no danger of scaffolding collapse.

For India Buildings, the containment netting has certainly proved its worth, meeting the demands of the project on every count, whilst also providing great publicity for both contractor and client.