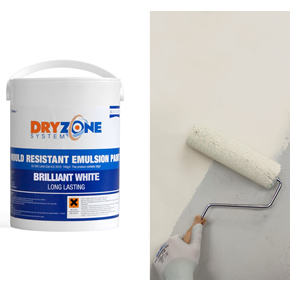 In unventilated areas, moisture build-up can lead to the growth of black mould. Safeguard Europe’s Dryzone System Mould-Resistant Emulsion Paint has been developed to tackle this; it can provide protection against the effects of condensation for around five years.

The low temperatures and high humidity of late spring can cause an increase in the risk of condensation. Bathrooms, bedrooms and kitchens often suffer the effects of this: moisture build-up from showering, cooking or drying clothes can condense on cold surfaces and lead to the unfortunate growth of black mould.

Although such problems can be alleviated by taking steps to ensure adequate ventilation – such as opening windows – it is difficult for some, such as the landlords of tenanted properties, to impose such actions.

To combat the issue, Safeguard Europe has developed its Dryzone System Mould-Resistant Emulsion Paint. The system, which has been designed for application over standard paint finishes, offers protection against the effects of condensation and the development of black mould.

The paint can be easily applied: after the area is prepared for re-painting, the walls, window frames, joinery and ceilings should be washed with Soluguard Multi-Surface Biocide. This works to remove all existing traces of mould.

A couple of coats of Safeguard’s mould-resistant emulsion can then be applied via a brush or a roller. The emulsion can be used over textured wallpaper or new plaster.

Available in white, magnolia and a variety of pastel colours, the paint is supplied in 5 litre containers. It should not be covered with any other wall coverings or paint once it has been applied.