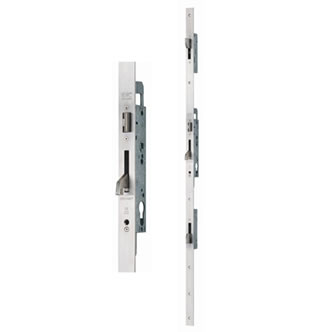 Integrated within thermal doorsets from Jack Aluminium Systems, Kestrel Aluminium Systems and Kaye Building Systems, the Sentinel M commercial multipoint lock provides building occupiers with a quick and safe way of escaping without needing prior knowledge of how to use the device.

Following rigorous testing at the ASSA ABLOY UKAS accredited test lab, the doorset was found to offer Enhanced Security alongside the capability to withstand sustained usage when used in a variety of commercial environments.

The doorsets were successfully tested to PAS24 after undergoing timed manual attacking methods, soft and hard body impact tests and static load testing up to 4500N.

As recent crime statistics show that burglaries increase by up to 20% once the clocks go back, commercial multipoint locks meeting the latest standards are crucial.

Sentinel M is resistant to casual or opportunist attack via brute force and manipulation, providing a high level of security to members of the public during the dark winter nights.

The Sentinel M range features a 3-point panic lock, a 3-point deadlock and a single point panic lock and is supplied alongside accessories such as panic touch bars, cylinder escutcheons and 17mm Euro Profile cylinders.