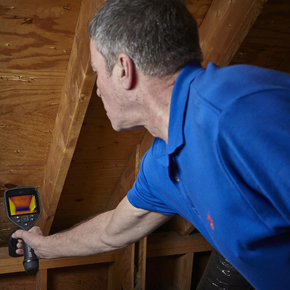 FLIR Systems has extended its Exx-Series range of advanced thermal imaging cameras to include three new models: the FLIR E75, E85, and E95. The innovative cameras will be launched at this year’s Ecobuild event.

Specifically designed for mechanical, electrical, and building applications, the new Exx cameras are able to identify structural deficiencies and hot spots before they become expensive problems.

The cameras offer an unobtrusive way to check energy efficiency, locate missing insulation, and identify areas of energy loss and moisture build-up. Electricians, plumbers and window and solar panel installers can benefit from the tool, in addition to those involved in the inspection of building fabric.

The user interface has been simplified to deliver faster and more efficient report generation and archiving capabilities.

The water-resistant cameras feature an area measurement functionality, compact interchangeable lenses, and laser-assisted autofocus modes. Display is around 33% brighter and 30% larger than that of previous Exx models.

The cameras also offer UltraMax, an embedded, super-resolution process which has been designed to improve effective resolution by almost 646,000 pixels, and thermal sensitivity by up to 50%.

In addition, the new models boast increased thermal detector resolutions with approximately 161,500 pixels; they are capable of measuring temperatures of up to 1,500 degrees Celsius.