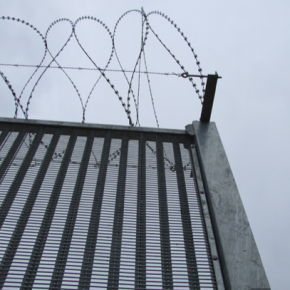 Cris Francis, head of commercial sales at Jacksons Fencing, comments on the importance of adequate perimeter security in UK prisons.

The Justice Secretary, Rt Hon Elizabeth Truss MP, unveiled the new Prison and Courts Bill in February 2017 which promises to dramatically overhaul the justice system. UK jails are struggling to cope following a 92% increase in prison population since 1993, creating an alarmingly dire situation.

Most worryingly for the public perhaps, are prison escapes. There have been 17 successful prison escapes in the 10 years to 2014/15, a number that could rise with the current instability. The recent high profile escapes at HMP Pentonville in November 2016 are a timely example of the worsening situation. One of the key aims of the Prison and Courts Bill is to improve the security of prisons in an attempt to tackle the current crisis.

In light of the recent break outs at HMP Pentonville, adequately securing prison perimeters must be of utmost importance, in conjunction with the other measures to tackle issues afflicting UK prisons. High security perimeter solutions such as fences and gates must provide enhanced protection in order to give security personnel the time to mount an appropriate response.

Jacksons Fencing is the only manufacturer with products with an SR5 rating from the Loss Prevention Certification Board (LCPB). The accreditation confirms that relevant products have been tested to withstand a determined attempt at forced entry using 18 volt cordless tools, powered disc cutters, a reciprocating saw as well as tools used in testing SR1, SR2 and SR3 products.

The best perimeter security solutions will have undergone further testing and grading by the Centre for the Protection of National Infrastructure (CPNI). These products are assured for UK Government use on critical national infrastructure (CNI) sites, making them ideal for securing prison compounds and perimeters.

Jacksons Fencing designs and manufactures the highest quality perimeter security and access control solutions in the UK. Their team of technical and engineering experts are readily available to provide support to the most complex and challenging projects.