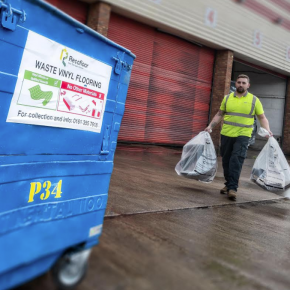 2017 proved to be a record-breaking year for Recofloor, as a whopping 563 tonnes of waste vinyl flooring was collected for recycling into flooring or other products.

Furthermore, collections from contractors increased by 10.5% in comparison to the year previous, saving even more vinyl flooring from heading to landfill.

Distributors and contractors who signed up to Altro and Polyflor’s national vinyl flooring recycling programme contributed a phenomenal 397 tonnes (71%) to last year’s total.

Since 2009, the scheme’s members throughout the UK and Ireland, which are in excess of 700, have collected 3,771 tonnes of waste vinyl flooring.

This equals 1,257,000 square metres of material; recycled with over 3000 tonnes of carbon dioxide savings.

A fine example is Mike Doran, owner of Wigan-based MSD Flooring Ltd, who signed to Recofloor after noticing the collection bins at one of his suppliers.

He said he felt it was a good idea to recycle the flooring, which were mainly offcuts, with the scheme working well for his company with efficient collections.

“We do a lot of social housing work and collecting waste flooring also helps the fitters to keep their work sites tidy,” Mike added.

Joe recognised the fantastic efforts of Recofloor members, adding that they have resulted in its annual collection figures growing year-on-year, being 10% up on what was collected throughout 2015.

He urged those who’ve helped to achieve this amount of flooring collected in 2017 to enter this year’s Recofloor Awards.

Joe added: “What we’re looking for are more contractors to share details of projects involving flooring supplied by Altro and Polyflor that has been collected and recycled through the scheme.

“In return companies can gain free publicity and an opportunity for a case study highlighting their successes.”