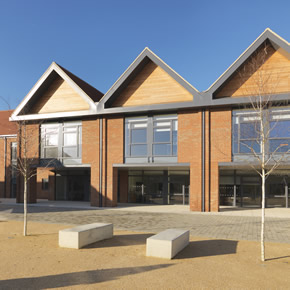 EcoTherm‘s Eco-Versal insulation has been installed in the roofs and walls of several new buildings for the Duke of York’s Military School.

The Duke of York’s Military School was established in 1803. It has recently been renewed with the construction of several new buildings, which feature EcoTherm Eco-Versal in both wall and roof applications.

In order to accommodate an additional 250 student spaces, the existing school buildings were renovated and extended; BAM Construction was contracted to erect a further seven blocks, including junior dormitories, a sports hall and two new teaching blocks.

Architect Scott Brownrigg also issued the demolition of a number of derelict 1960s teaching blocks, improving the setting for the historic school buildings.

The new teaching and boarding facilities feature a pitched roof design, which complements the surrounding listed architecture. EcoTherm Eco-Versal was specified to insulate the roofs: fitted between and over the roof battens by Charles Bates Roofing, the system provided a lightweight insulation solution.

Roe Timberframe used Eco-Versal within the wall panels of its structural timber frame buildings, which were then clad with brick facades to the teaching and dormitory buildings.

Eco-Versal has been designed for use on floors, walls, ceilings and dormer cheeks. Faced with aluminium foil composite, the board can achieve a thermal conductivity of 0.022 W/mK.

Since its installation, the system has contributed towards the building’s interim BREEAM rating of ‘Very Good’ with a BRE Green Guide generic PIR insulation rating of A.