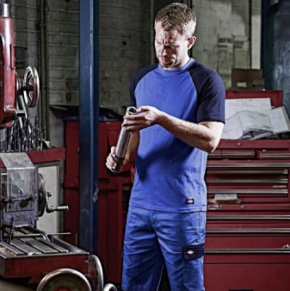 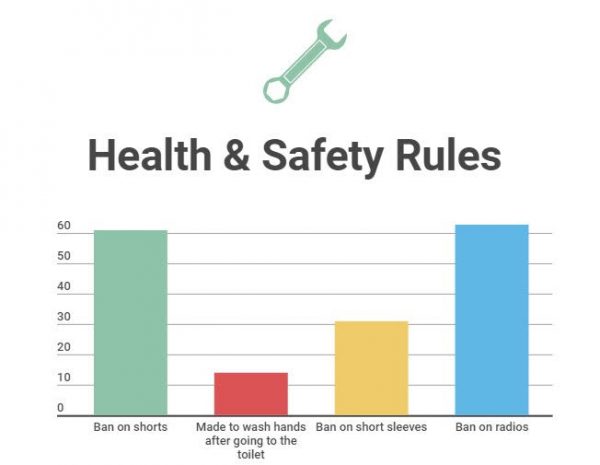 1. The ban on shorts

61% of participants experienced a ban on shorts in their site/workplace in the past. Whether workers can wear shorts on a site depends on the site’s policy. If the site policy states that workers must not wear shorts to work, then it’s expected that everyone adheres to the ruling – even if in the sweltering heat of summer.

2. Must wash hands after toilet or risk removal from site

14% of participants said that they have been told to wash their hands after going to the toilet or risk removal from site/workplace. (Dickies Workwear are unsure of how this is monitored, nor whose job it is to keep watch on the lavatory usage and hand cleanliness thereafter.)

3. Wearing a harness which isn’t attached to anything

Across all industries planning to work at height, the regulation is a maximum of 4 feet before wearing a harness. In construction work, the threshold height is 6 feet above a lower level. Fall protection on scaffolding is required at 10 feet, although a Twitter user offered up this rather ludicrous rule that they experienced often in the ‘90s.

4. A ban on short sleeves

31% of participants have been banned from wearing short sleeves on site. In recent times, more and more construction sites and companies are adopting the “long sleeve PPE” safety policy. This generally refers to the requirement to have all members of the workforce wearing long sleeve shirts when working on site.

5. The ban on radios

63% of participants said that they’ve experienced a ban on listening to the radio on site. A highly debated rule in the trades industries, and whilst environment must be taken in to context (building site vs. domestic property), having a radio (or other devices) is now considered to be unsafe, given that it distracts the workers from the task at hand, which often involves them having to concentrate on doing the job properly and safely.

In the construction industry in the UK, 3% of workers sustain a work-related injury and 11% of these injuries are from being struck by an object. In fact, another 66,000 injuries are estimated to go unreported every year.

While it isn’t 100% compulsory by law to wear a safety helmet on a construction site if there is no risk of head injuries, however, on most construction sites there are dangers so wearing hard hats are necessary.

7. The ban on heavy lifting

According to the Health and Safety Executive (HSE), handling, lifting or carrying makes up 20% of non-fatal injuries to employees.

These factors can create excessive stresses and strains on the body. This can cause immediate damage to muscles and tendons such as sprains and pains but can also lead to longer-term or recurrent problems. Therefore, it’s in everyone’s best interest to not exceed weight restrictions.

8. The ban on stepladders and ladders

9. The way hi-vis clothing is worn

One of the respondents was not allowed onsite until his hi-vis vest was completely fastened at the front. According to HSE, around seven workers die and 93 are seriously injured annually by vehicles or mobile plant on construction sites.

Perhaps not as much a rule as a standard protocol, but we’ve heard of the term “the client is always right” and so, especially when working in housing sites, it often happens that tenants like to get involved.

Mark Tapper mentions, “If you’re unsure as to why a particular rule may be in place at your place of work I’d recommend speaking to the H&S team, as it is likely that there is a logical explanation.”