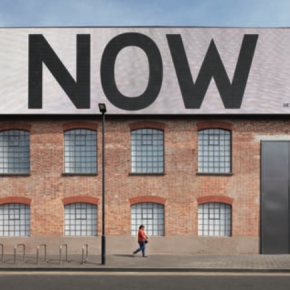 Newport Street Gallery is the realisation of the long-term ambition of artist Damien Hirst to share his extensive private collection of more than 3,000 works of contemporary art with the public. ABC+D finds out more…

This iconic brick building, with its bold vision and traditional craftsmanship, has been highly praised in the architectural world with accolades ranging from Supreme Winner in the 2016 Brick Development Association (BDA) Awards to winner of the prestigious 2016 Stirling Prize.

According to the judges of the Stirling Prize: “This highly accomplished and expertly detailed art gallery is a bold and con dent contribution to the best of UK architecture. Caruso St John’s approach to conservation is irreverent yet sensitive and achieves a clever solution that expresses a poetic juxtaposition of old and new. The collection of buildings is beautifully curated, pulled together by the use of brick yet still expressive of their individuality.”

A bold and sympathetic vision

Designed by Caruso St John Architects, the gallery occupies a terrace of new build and refurbished blocks that line Newport Street’s eastern side opposite the elevated railway arches in Vauxhall, south London. 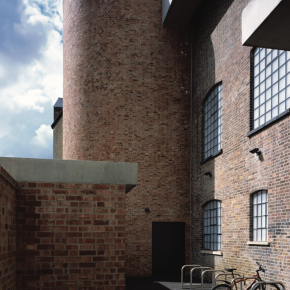 The project involved the conversion of three listed brick buildings, which had been built in 1913 as carpentry and scenery painting workshops for the once booming West End theatre industry. Two new build structures were constructed at either end to create a gallery that spans half the length of the street.

The entire gallery, which occupies 37,000ft2, was internally restructured to include six exhibition spaces with three large galleries on each of the two doors. The two levels of the gallery are linked by a set of three elliptical spiral staircases, which are constructed from white German-engineered brick with built-in precast balustrades, making a spectacular feature.

As both the ground and upper doors within the five buildings are continuous, the spaces have the flexibility to accommodate both individual works and large-scale exhibitions. With some of the inside doors taken out to open up the space, the vast interior has been described as cathedral like. In fact, one of the central galleries has a ceiling height of 11m, split over two levels to allow for the installation of larger sculptures.

The central architectural inspiration for the design were the original Victorian brick buildings with their unusual proportions, groups of low-level windows and high, blank walls. This composition was continued in the design of the new buildings, which are embellished by a spikey saw-tooth roof at the northern end, which echoes the industrial heritage and local roofscapes.

As the brickwork was very much the unifying force binding the old and the new elements together, it was important that the new semi-industrial façades were as sympathetic as possible to the listed buildings. This was a challenge, as much of the old brickwork comprised all sorts of different colours. 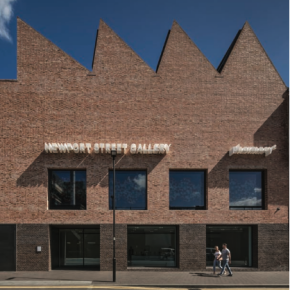 Peter St John, partner at Caruso St John Architects said: “We had to really search for a brick that had something of the quality of the existing building. The brick we found, by Northcot in Gloucestershire, is an oil release brick with a smooth surface. It is not like a London stock with a sandy surface and the colour match is pretty good.”

After a detailed selection process, master brickmakers at Northcot Brick, who still use brickmaking techniques that have hardly changed over the centuries, created two distinct bespoke blends – Newport Light and Newport Dark –  to match the common fletton-style brick of the listed buildings.

Both blends were essentially a variation on standard production, with one requiring the removal of a specific colour and the other needing a crisper edge than its standard. They were then red the traditional way in one of the UK’s last coal- red kilns in order to give a natural variation and richness of tone.

The majority of the brickwork was in Newport Light (181,000 bricks in total), a hard pale semi-glazed machine-made brick, which was laid predominantly in a Flemish bond.

Tom McGuire, managing director of Grangewood Brickwork Services said: “By laying the bricks in a Flemish bond pattern on a natural light lime mortar with no expansion joints, we were able to make the new façade seem as solid, thick and robust in appearance as the old buildings.”

The lower courses were constructed with a total of 17,000 Newport Dark bricks, which were laid in a header bond on a dark mortar at the front of the building to reference the grey plinths of the original workshops. At the back of the building header bonds followed the external curvature of the spiral staircase.

The precise quality of the finish and the intricate brick detailing was an immense work of craftsmanship from manufacture through to the specialist brick laying skill required, which was recognized by a BDA Craftsmanship Award.

A total of 6,000 bespoke handmade and standard machine- made special shapes were created to match both blend types. These ranged from intricate cappings and copings on top of the saw-tooth gable ends, through to transition bricks and specials to the sills and heads of the windows.

Dale Moss, works manager at Northcot Brick said: “A unique mould had to be made for each of the special shaped bricks. In many cases only one special was required, so these were red as a one-off with the mould never to be used again.”

In addition to conventional masonry, header brick-clad lintels embellished the windows and a special lightweight FastClad brick slip system used the same bespoke blends to give continuity of detailing to the soffits in the main entrance.

According to Peter St John: “Brick is a very versatile material and I think here we’ve demonstrated that we can turn something that was used for an industrial building into something that is really delicate and beautiful. Brick has that capacity because of its intricate surface and because of the careful way in which it can be laid. I think it’s a very beautiful material.”

The five linked brick buildings, which are all different but obviously related, have created a sheer and impressive street elevation with a profound sense of historical context.

What was once an unassuming street of industrial buildings is now an architectural masterpiece and a free public gallery which will benefit the community for many years to come.

Peter St John said: “It’s rare for architects to be given the opportunity to realise a personal vision of the quality of the Newport Street Gallery, and for that vision to have a generous public dimension. We see the building as a place for direct, intimate and luxurious encounters with contemporary art, and we are very pleased that this award will bring more people to see this extraordinary collection.”