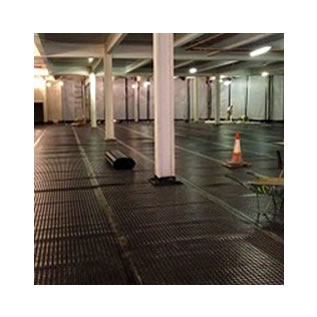 Water was seeping through construction joints in the slab of the 1000sq metre floor area and the vertical RC walls were allowing in large amounts of liquid, with the basement being deemed unusable for a number of years.

Dewatering pipes were installed on the vertical planes and an engineered sprayed concrete was laid on all the vertical surfaces to slow the ingression of water through the elevations.

All of the leaking movement joints were raked out and Gulliver Timber applied FlexProof-X1 to these areas to halt the flow of water from entering.

A perimeter Basedrain was installed into the wall and floor junction in order to remove any water that entered through the structure and lead it to a safe drainage option.

Newton 508 cavity drain membrane was used to curtain hang the walls, the floors were treated with Newton 520  20mm floor membrane, a floor screed was applied on top of the membrane and a dry lining frame was installed throughout.

The Newton System 500 provided a robust and easily maintainable waterproofing system that complied with BS8102:2009 and the area is now a grade 3 space that is fully habitable.

The Newton Cavity Drain System 500 is suitable for new build basements and refurbishment projects, the 508 mesh can be used internally below ground to retain walls and vaulted soffits, whilst the 520 membrane is typically used when there is a risk of severe water penetration.