In April 2016, the world-renowned London School of Economics announced that Grafton Architects were to design their next major project; built by Mace Group, the Marshall Building at 44 Lincoln’s Inn Fields covers over 2,250 square metres of floorspace and presented quite the task for Newton Specialist Contractor Cast Contracting Ltd (CCL).

CCL were appointed to design and install the waterproofing by principal contractor Mace Group late last year. As a Newton Specialist Contractor, CCL recommended the Newton CDM System to provide a completely dry, guaranteed solution on such a high-profile project, that includes an extensive two-storey, mixed-use basement that will house squash courts, a sports hall, changing facilities and plant areas.

Otherwise referred to as Type C waterproofing, the Newton CDM System is the safest and most reliable form of waterproofing. 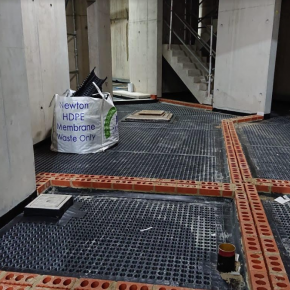 Prior to installation, CCL applied Newton 906 Lime Inhibitor to the new slab to prevent free lime from the concrete from affecting the drainage membranes.

The Type A liquid waterproofing membrane Newton 103-S was also applied internally to many of the concrete surfaces as a barrier to water. 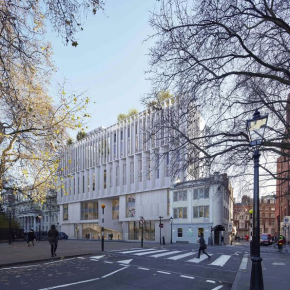 Newton Basedrain channels formed a drainage system to direct any water captured by the membranes to the point of discharge, and the whole system was sealed with Newton OverTape.

Despite requiring dedicated delivery slots, and working to an extremely tight program of work, CCL were praised on the quality and speed of their installation, which was completed well within the time limit.

The Newton recycling service was also a great success, recycling 115 kg of HDPE waste and, therefore, preventing over 132 kg of carbon dioxide emissions.