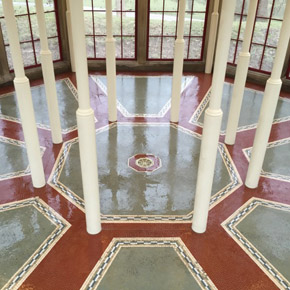 Soaked in history, the ceramic mosaic floor of the game larder at a major stately home has been restored by National Federation of Terrazzo, Marble and Mosaic Specialists (NFTMMS) member JW Restoration.

Brian James, on behalf of the federation, said this symbolises the quality of the skills and craftsmanship that NFTMMS members possess, with spectacular outcomes extremely likely.

The game larder, which dates back to 1909, was used to hang game shot on the Estate. It became derelict after the introduction of modern refrigeration techniques, which led to it being used for housing chickens throughout the 1950s and 60s.

Oliver Wood, of JW Restoration said it was the company’s ‘expertise in mosaic restoration’ and ‘extensive experience of working within listed and historically important buildings’ that earnt them in the contract.

He went onto say it was a ‘fascinating and challenging’ project which was also ‘hugely rewarding.’

Beforehand, the sizeable octagonal mosaic floor was bereft of large sections of ceramic tiles, whilst damage was evident where the original internal metal work had been removed. Furthermore, the game larder had encountered exposure to the elements over a long period, namely from chicken waste causing acid attack.

JW Restoration hand cut the ceramic tiles to the correct size and appearance to match the original perfectly. By working from a rubbing of a section of the mosaic, it allowed them to replicate the fan pattern of the original. The missing sections were then made in their workshop, followed by transportation to the stately home for the installation.

The GGF announces the latest addition to its suite of health and safety publications with the revised and redesigned ‘Asbestos Cement; Soffits and Rainwater Goods Code of Practice’.

Imperial Bricks has announced an exclusive partnership with a brick manufacturer in Turkey. This will provide an assurance of quality and year-round capacity for seven of its most popular brick colours and styles.

With a duty of care, valuable equipment and personal data, the education sector presents one of security’s biggest challenges. Choosing the right access control solution is critical. Could going wireless be an option? ASSA ABLOY asks…