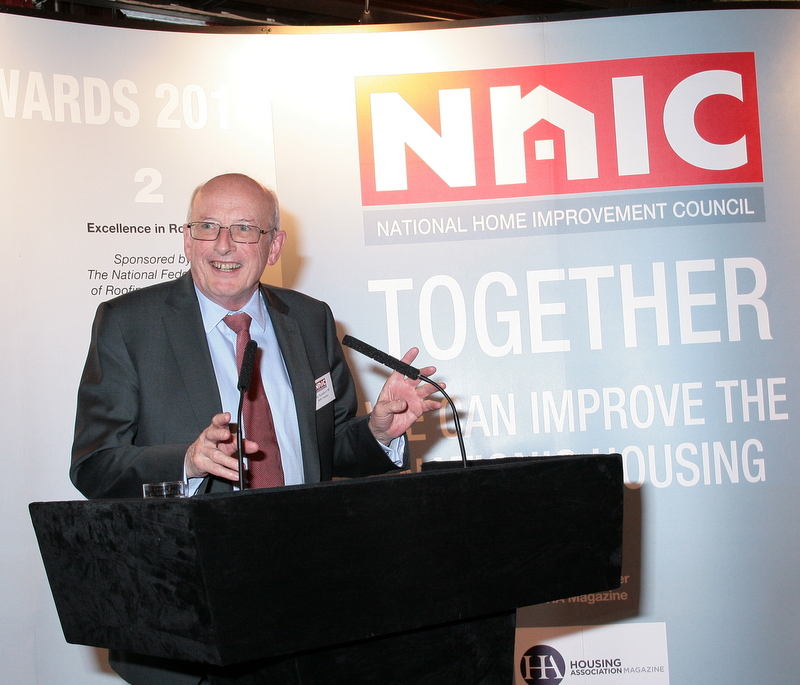 Results of the NHIC Awards for 2014

There were 6 categories, 2 Merit Awards and the special George Plucknett Award.

NHIC President, The Rt Hon Nick Raynsford MP presented the 2014 Annual Awards on the 13th November 2014 at the Gladstone Library in London.

NHIC Awards scheme has played a key role in attracting entries from across the spectrum of housing modernisation projects that include energy efficiency, renewable technologies, safety and design.

There were two NHIC Merit Awards for achievement or initiative by an individual or organisation – each sponsored by an NHIC member.

SMA Solar UK Ltd   Educational Programme for schools on Renewable Electrical Energy Technologies, engaging children with a booklet which has been distributed to over 2,000 schools

CompetentRoofer   Promoting the excellence of CompetentRoofer to the housing association sector which has saved clients some £500,000 in administration costs

Walsall is in the top 10% of the most deprived English local authorities and consequently has very high levels of fuel poverty.  The area also has a large number of tower blocks and solid wall properties so there was clearly a need for large scale energy efficiency improvements.

Solid wall insulation was installed to 1,000 properties, biomass for 150 homes, gas district heating for 150 homes and new domestic heating for 700 homes.  In addition, solar pv has been installed on tower blocks and some private homes.

The scheme was evaluated and 90% of the tenants surveyed said their homes were warmer and bills lower.

A second scheme worth £26 million has now been agreed which involves an additional 3,000 properties.

The judges felt that this scheme was an exemplar for other authorities and were particularly impressed with its scale, the wide range and high quality of the energy efficiency solutions installed including pv and the consequent reductions in carbon emissions. Community engagement was notable and so too was the visual improvement to the facades of the properties which has restored local pride in the area.

Excellence in Roofing sponsored by National Federation of Roofing Contractors

Frogs Hall represents a no expenses spared restoration of a 14th Century Wealden Hall Home.  The existing roof was dismantled and replaced with new timber to the original design with lime mortar used to secure the ridge and hip tiles.

The judges noted that the roof was brought up to current thermal energy efficiency standards using modern insulation materials and to prevent condensation a high performance breather membrane was incorporated below the tiles.

The judges considered this project showed great attention to detail from design through to delivery.  Though an extension it blended in perfectly and in fact complimented the period property.  The design and build represented a successful collaboration between homeowner and professional builder.

With glass on all sides of the structure in the correct proportion, the bespoke design was well crafted with a perfect finish.  It highlighted the use of state of the art products in doors, windows and rooflights demonstrating the best attributes of glass and glazing in terms of energy efficiency and giving natural light.

It was also noted that the supporting material, provided with the entry, confirmed a high level of customer satisfaction.

They have put in place a comprehensive family of qualifications to ensure managers undertake their role in gas safety management more effectively, ensuring that safety in all social housing complies with all current regulation and legislation.

The judges considered that in addition to putting in the standards framework the safety profile of local Authorities, Housing Associations and Social Housing had been actively raised at Government level.

This award was hotly contested and not only looks at the best in glazing that a glazing company can bring, but also at the people that run that business and what they bring to both their employees and their local community. This years winner of the award has not only enhanced its staff wellbeing but also their local community with innovative glazing solutions for both domestic and community based projects.  They are commended for their schools projects, customer care programmes and internal staff training.

The NHIC aims to encourage a vibrant renovation, modernisation and improvement market in both the private and public housing sectors.  It seeks to communicate the benefits of home improvement to the consumer through both general and specialist media.   In this respect we are pleased to recognise the valued contribution made, featuring bathroom products and water saving initiatives, by two journalists working in that sector.

Named in honour of one of the key figures in the NHIC in setting up and establishing the Council. The award for 2014, the 40th year of the NHIC Annual Awards, is chosen from the finalists of all categories and consequently represents an outstanding level of achievement.