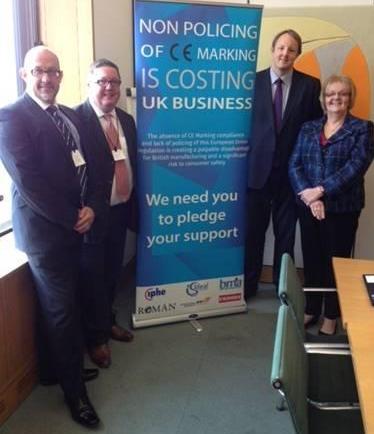 Briefing session for MPs at Westminster

Consequences of non-policing of CE Marking

Franke Sissons hosted a hard hitting briefing session for MPs in Westminster to highlight the shortfalls of legislation that currently goes completely unchecked.

The briefing, supported by local MP Toby Perkins and the industry body that supports manufacturing in the bathroom industry, The Bathroom Manufacturers Association (BMA), detailed to MPs how contractors are regularly substituting unlawful and inferior products in the final fit, through either lack of knowledge in the law or in ignorance for the cheapest option.

Frankes Managing Director, Andy Dukelow: This is a problem right across the building industry not just in our sector. Without a CE Mark on products for bathrooms and washrooms, consumers may endure scalding injuries, product failure under load and ultimately products will fail completely, there is no back up and absolutely no guarantee.

Those manufacturers and suppliers who have made the investment to comply, with what is actually a law not just a guideline, will continue to be undercut by non-conforming companies putting UK jobs at risk. I am personally deeply frustrated by the slow pace of understanding at Government level, this is a UK Law, and one of the few that could offer UK business a tangible level of support and actually add longevity to cash savings to the British tax payer.

Why CE Marking compliance is important

The absence of CE Marking compliance and the policing of this European Union directive is creating a major disadvantage for British manufacturing.

Deprived of CE conformity, consumer safety is at danger and large investments made in public and private buildings is being undermined by poor-quality products.

As a direct result architects and specifiers who particularly stipulate quality conforming products for bathrooms and washrooms in hospitals, schools etc, to save the building owners are not liable to claims for injury, are finding these are then substituted for non-compliant, cheap products at installation stage to simply increase profit for the contractor or installer.

Franke Sissons Ltd says it could expand its business and create even more employment opportunities if mandatory proof of CE Marking at tender stage was instigated.