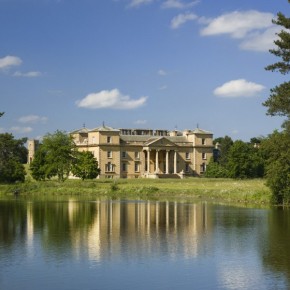 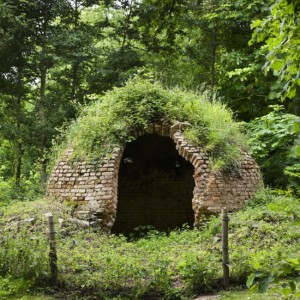 Ice Houses are unusual structures, often found in the grounds of stately homes. The practice of building Ice Houses came to England from France in the 17th century as a means of storing ice for use in the households of the gentry.

A fine example of an eighteen century ‘Ice House’ can be found at Croome, an 750 acre National Trust estate in Worcestershire, which is famous for the stately home Croome Court and its extensive grounds, which were Lancelot ‘Capability’ Brown’s first major landscape design.

The Ice House, which is located close to the old carriage route leading from the Estate Church of St. Mary Magdalene, would have been an impressive sight in its day.

Measuring approximately 15 ft 6 inches wide by 29 ft 6 inches high, one third of the egg shaped brick structure sat above ground with the remaining two thirds hidden underground, which was where the ice, ‘skimmed’ from a nearby pond, would be stored for use in the kitchens.

The brick dome was probably originally covered by a tee-pee styled thatched roof, and a short three to four metre long brick and timber passageway would have served as an entrance. 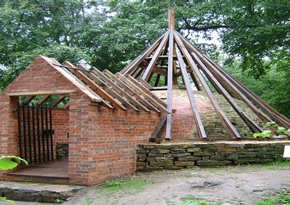 Thought to have been originally filled with straw, the passageway was designed to stop the wind and the rain from entering the ice chamber. The surrounding trees would also have helped keep the Ice House shaded and cool in summer.

Although kept in reasonably good working order during the 150 years of its working life, the Ice House ceased to be used in 1915 and so fell into significant decay, being filled with rubbish after the 1939 _ 45 war as a safety measure when the Court was in use as a school.

The National Trust acquired the landscaped park and buildings in 1996 and began restoration according to the eighteenth century plans and surveys.

In 2007 plans were made to restore the Ice House back to its original splendour and, with help from a £46,000 grant from Natural England’s Countryside Stewardship Scheme (CSS) plus funding from the National Trust itself, restoration was completed in September 2009.

Restoration of the Ice House

Architect John Goom appointed to oversee the restoration of the Ice House. Fortunately, there was sufficiently good documentary evidence, backed by archaeological findings, in the form of an old article of the 1950s and a black and white photograph taken of the Ice House in the 1920s, to give a good indication of how the building would have originally looked.

However, immediate structural repairs were required to ensure that the existing fabric could be retained in situ. A large part of the original brick dome was missing rendering it structurally unstable.

This needed to be rebuilt with bricks that exactly matched the originals both in size and appearance and the rest required extensive re-pointing. The missing passageway or porch also needed to be re-built on the basis of archaeological evidence in order to secure the stability of the dome. 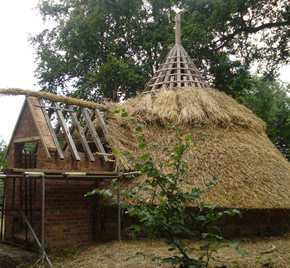 Role of Northcot Brick in restoration

Integral to the project was the sourcing of historically authentic handmade bricks that would exactly match the size, tone, texture and character of the existing brickwork.

Cotswold based independent manufacturer, Northcot Brick, was approached as one of the few makers of genuine handmade bricks with the extensive restoration experience, craftsmanship and the specialist brick matching skills required.

Northcot’s team of master brick makers, who use age-old bench mould techniques that have hardly changed over the centuries and fire in the traditional way in one of the last remaining coal fired kilns, created a new bespoke smooth faced brick, which matched the subtle orange-yellow tones and the weather-worn appearance of the originals.

Now known as ‘Packwood Rural’, this particular blend of brick has subsequently been incorporated into the company’s main product range, and it has also proved to be a popular choice for other conservation projects, extensions and renovations.

Once the brickwork of the Ice House had been restored, a new oak frame was constructed using photographic and site based evidence to decide its form and covered with long straw thatch, which is traditionally used in the locality in order to replicate the original appearance of the building.

Various artifacts found in the dome were then returned to their original positions and other inanimate objects were subsequently placed around the inside of the roof structure for future preservation. 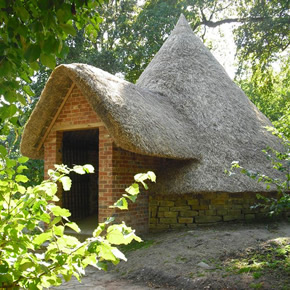 Thanks to the painstaking restoration and traditional craftsmanship, visitors to Croome can now visit the Ice House and go through the new entrance tunnel, up to an iron gate at the dome, and peer down into the depths of this unusual structure in order to fully appreciate its unique history.

Catherine Hurley, a historic buildings advisor with Natural England: ñThe Ice House is of particular cultural and historical importance, giving us a link back to how Croome Court was managed, and gives us an insight into the daily life of its former inhabitantsî.