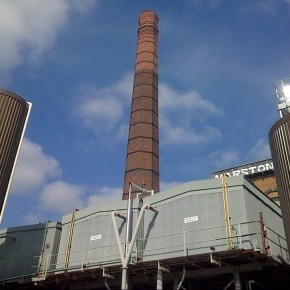 THE REFURBISHMENT OF MARSTONS HISTORIC CHIMNEY

Marstons brewery in Burton-on-Trent, is very much the spiritual home of British beer.   Still brewing in the traditional way, this historic brewery was established in 1834, using the unique spring water from the Trent Valley that gives its ales the famous sulphurous aroma known as the Burton snatch.

The Victorian brewhouse, which stands in the town centre, boasts an impressive grade II listed industrial chimney, which is a well-known local landmark.

Erected in 1875, this eight-sided brick chimney was originally one of two on the site used by the coal-fired boilers as part of the brewing process. However, when the company switched to more modern gas-fired boilers, the remaining chimney was no longer used and its brickwork gradually began to degrade through frost damage.

In January 2013, initial investigations by Rafferty Steeplejacks from Stoke-on-Trent revealed the need for urgent repair works.  The 41 metre high chimney was in a very poor structural condition, with the brickwork on the top 14 metres of the stack (which had been added in the 1970s) literally crumbling away.

Due to the seriousness of the defects encountered, Marstons immediately instructed Raffertys to install safety scaffolding all round the top of the chimney to prevent any further loose brickwork falling to the ground.  The installation of the scaffolding had to be carried out very carefully using a crane-suspended man basket rather than ladders, so as not to risk disturbing any more of the deteriorated brickwork.

In the meantime, a comprehensive inspection report and refurbishment plan (including detailed drawings of the brickwork) was put together and presented to the engineers and senior management of Marstons and to the local council for approval.

As a Grade II listed building, the chimney had to be completely restored and also returned to its original height of 36 metres.  This meant removing all the poorly constructed 1970s extension and replacing it with 9 metres of new brickwork, which would have to be specially made to match original Victorian structure.

Cotswold based independent manufacturer, Northcot Brick, was approached as one of the few makers of genuine handmade bricks with the extensive restoration experience, craftsmanship and the specialist brick matching skills required.

Northcots team of master brick makers, who use age-old bench mould techniques that have hardly changed over the centuries, as well as one of the countrys last remaining coal fired kilns, created a new line of bricks with subtle red tones, light texture and a weather-worn appearance that exactly matched the originals.

Now known as Brickfield Antique, this bespoke blend of handmade bricks has subsequently been incorporated into the companys main product range, where it has proved to be a popular choice for other conservation projects and renovations as well as new build.

The rest of the original chimney was meticulously re-pointed throughout using an English Heritage approved lime mortar, and any loose or missing bricks were replaced as required.  In addition, repairs were made to the retaining band steelwork and the lightning protection system was upgraded to comply with current BS EN 62305 European standard.

This extensive £¼ million project was carried out over a 21 week period without any safety incidents and to the full satisfaction of the client, the local council and all involved.

Garry Hollins, Site Engineer at Marstons Plcc: This particular industrial brick chimney has stood for well over a century and is an iconic local landmark in Burton-on-Trent. We are delighted with the painstaking restoration work undertaken, which will ensure that it stands for many more years to come as a testimony to the brewing industry.