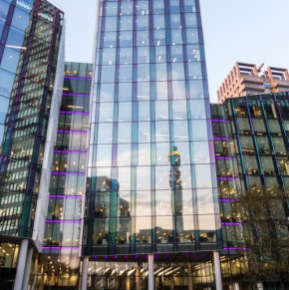 Aspex is encountering a rewarding return on its investment, after clinching a number of big contracts to supply its Novista Riser system.

Over the last six months, the company, who is one of the UK’s leading architectural ironmongery and doorset companies, has experienced a large increase in its orders, tripling its sales of the Novista Riser doorsets since last year.

Originally developed three years ago to meet the demands of architects looking for a minimalist aesthetic, the Novista Riser system has undergone a market boom, featuring in London’s Facebook offices and Chelsea Barracks, a major residential scheme in London.

Aspex has also recently bagged contracts to supply the system in Paradise Street, a student accommodation in Coventry, Nile St, an apartment scheme in London, and a prestigious office development at Station Road Station in Cambridge.

Ashley Burberry, MD of Aspex UK, commented: “We are really pleased with how successful the Novista Riser system has taken off. It has become a huge game changer for Aspex and has allowed us to strengthen our presence in the market.

“Over the next six months, we are working on some exciting projects which prove testament to the success of our range and our ambition to continue to develop products in line with architectural demand.”

The Novista Riser system comes with either a timber or steel door leaf and is suitable for an extesnive variety of projects, with single, double, triple, and quadruple combinations available.

It can be factory painted to any RAL colour or primed to allow on-site painting for precise colour matching with the adjacent wall.

The doorsets are suitable for locations which require either a very high fire or acoustic rating, and are fire rated to up to FD120 and acoustic rated up to 40dB.

Danish-manufactured Troldtekt panels are commonly specified across the UK and Europe – here’s how they have been used in a pair of projects in their homeland.

Abloy UK has added another course to its comprehensive Academy – Electric Locking for Fire and Escape Doors.