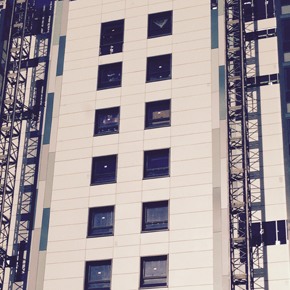 NVELOPE cladding support systems have been installed at the Sterte Court apartment complex in Poole. The installation has not only improved the buildings’ visual appearance and sustainability factors, but also extended its life by at least 30 years.

Sterte Court is a residential development in Poole, originally constructed in the 1960s. The complex consists of two 10 storey and two 4 storey tower blocks comprising 134 flats.

Constructed with rendered concrete wall panels on a concrete frame, the buildings’ poor insulation was in need of an upgrade.

A project to refurbish the development began in 2013, when Poole Housing Partnership, which was set up under the Government scheme to bring investment for improvements to homes across the Borough of Poole, got involved.

With the aim to improve the residents’ living conditions, reduce fuel poverty and update the visual appearance of the development, the £6.7m project took approximately 18 months to complete.

When it came to focusing the attention on the new façade, NVELOPE’s NV1 cladding support system was specified to hold the vertical cladding in place.

A key project requirement was to improve the thermal bridging.

Thermal bridges cause increased flow of heat and must be considered in the design and installation of a façade system. As the fixing of ventilated cladding must pass through the thermal insulation into the substrate, it cannot be avoided.

It is therefore important to achieve a thermal decoupling of the substructure from the ventilated façade through thermal separation layers.

NVELOPE’s N1 brackets are pre-assembled with thermal isolators which help reduce thermal bridging and prevent a chemical reaction which could occur between the aluminium bracket and the lime in a concrete frame.

The brackets allow for the expansion and contraction of the cladding when under strain from various weather conditions including strong winds.

All NVELOPE cladding systems can be engineered to project specific requirements by its technical design support service. This provides architects and specifiers freedom with an almost infinite range of façade appearance and layout options.