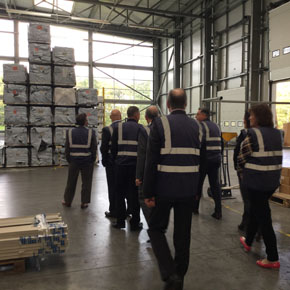 Deceuninck UK recently opened its doors and gave a behind the scenes tour to editors of the industry’s trade and commercial media.

Included in it was Deceuninck’s impressive manufacturing plant and gargantuan warehouse, as well as a sneak preview of its up and coming innovations. Rob McGlennon, Managing Director of Deceuninck, spoke about the event.

He talks about how the company haven’t worked with the industry’s magazines for a long time and many of them haven’t visited Deceuninck.

The event, which was well received by the editors of these industry magazines, gave an insight into how the company builds long standing relationships.

As well as this, guests were shown how new products for the good of the market are developed, along with an overview of the whole Deceuninck picture.

Mr McGlennon also spoke about the eye-opening experience many had with the commercial press not being aware of the over and above support they offer its trade fabricators.

Whilst the trade media weren’t aware of the extensive list of commercial case studies they have worked on with its commercial fabricators, which include Hinkley Point, Fairview Homes. Abbey Road and Kennedy Gardens. 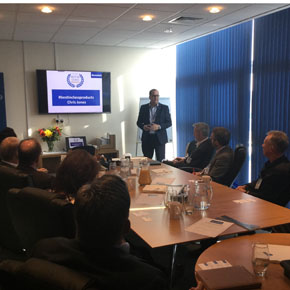 Editors were also given a preview of some of the new products coming next year, in addition to the Heritage Window Collection and more recently Grey Substrate product launches of in 2017.

Visitors were treated to a sighting of Deceuninck’s impressive warehouse that allows delivery of its 26 colourways from stock, for both profile and ancillaries.

Before the tour, a fun exercise took place that saw one visitor choose a specific product and a specific colour combination, which the challenge then to see how quickly and easily it could be found in the warehouse.

The twist is, Deceuninck have a humungous warehouse, so the task would appear near impossible; however, because of the advanced set-up, the efficiency of the operation was easily demonstrated.

It was also announced that 51% of its products are now supplied in colour, exceeding the milestone set of 50%, because it can be done very easily.

Rob McGlennon concluded: “At Deceuninck, we are always keen for people to come and visit us in Calne, customers and prospects alike, but it was nice to take a day out to build further on the relationships we have with the industry’s press, for our benefit and of course the benefit of our customers.”