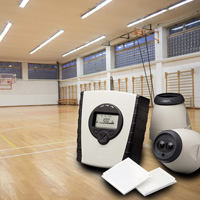 Reflective beam technology offers reliable smoke detection for large indoor areas. An optical beam smoke detector transmits a beam of invisible infrared light across the building space to be protected, and a receiver detects and measures this light. Smoke interference along the beam path triggers the alarm signal when the pre-set threshold is reached.

In the reflective beam system, the receiver and transmitted are contained in the same unit, with a small reflective prism bouncing the beam back to its source.

As each beam unit is relatively small, fixtures are easy to install and blend into the surrounding area. This results in safe fire protection, without causing unnecessary damage to the building’s structure, function or aesthetics.

The units require minimal wiring on only one side, with the reflective prism easily fixed to the opposing wall. Motorised, automatically aligning beam heads and dust compensation mean the Fireray 5000 is easier to install and resistant to faults and false alarms.

In certain instances, obstructions along the ceiling may interfere with the beam path, causing difficulties installing a transceiver and prism without external reflections reducing the effectiveness of the system.

In these situations, end-to-end beam systems are recommended, as extraneous reflections near the beam path do not affect an end-to-end optical beam.

In an end-to-end system, the transmitter and receiver are on opposite walls, so any light reflected back at the transmitter has no effect, and any smoke entering the beam path anywhere along its length will still be safely detected by the receiver.

Furthermore, the Fireray 3000 is smaller and more discreet than the Fireray 5000, as each had only contains one element of the system, and it does not require a reflector panel.